The deformation that occurs as force is applied and removed is called “elastic” deformation. The deformation that occurs after force application or removal is called “viscous” deformation. Because tissues of the body exhibit both elastic and viscous properties, they are called “viscoelastic”. If the recovery time between successive exertions is not long enough for a given force and duration, the recovery will not be complete and the tendon will be stretched further with each successive exertion. Goldstein et al. (1987) found that when finger flexor tendons were subjected to 8 seconds (s) physiological loads and 2 s rest, the accumulated viscous strain after 500 cycles was equal to the elastic strain. When the tendons were subjected to 2 s work and 8 s rest, the accumulated viscous strain after 500 cycles was negligible. Critical recovery times for given work-rest profiles have not yet been determined.

Forces are transmitted through tendons to maintain static and dynamic balance for specified work requirements. Contracting muscles tend to rotate the joints in one direction while the weight of the body and of work objects tends to rotate them in the other. Exact determination of these tendon forces is not possible because there are multiple muscles and tendons acting about each joint structure; however, it can be shown that the muscle forces acting on the tendons are much greater than the weight or reaction forces of work objects.

The forces exerted by contracting muscles are called tensile forces because they stretch the tendon. Tensile forces can be demonstrated by pulling on the ends of a rubber band. Tendons also are subjected to compressive and shear forces and to fluid pressures, which are illustrated in Figure 4 for the finger flexor tendons in the wrist. 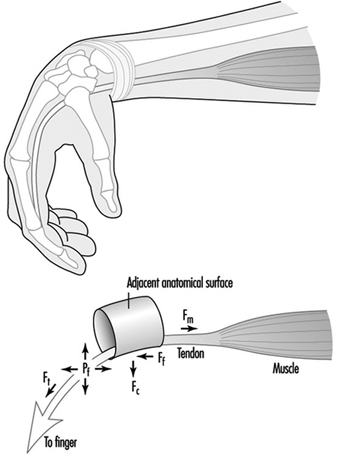 Exertion of the fingers to grasp or manipulate work objects requires the contraction of muscles in the forearm and hand. As the muscles contract, they pull on the ends of their respective tendons, which pass through the centre and circumference of the wrist. If the wrist is not held in a position so that the tendons are perfectly straight, they will press against adjacent structures. The finger flexor tendons press against the bones and ligaments inside the carpal tunnel. These tendons can be seen to protrude under the skin toward the palm during forceful pinching with a flexed wrist. Similarly, the extensor and abductor tendons can be seen to protrude on the back and side of the wrist when it is extended with outstretched fingers.

Friction or shear forces are caused by dynamic exertions in which the tendons rub against adjacent anatomical surfaces. These forces act on and parallel to the surface of the tendon. Friction forces can be felt by simultaneously pressing and sliding the hand against a flat surface. The sliding of tendons over an adjacent anatomical surface is analogous to a belt sliding around a pulley.

Contraction of a muscle produces an immediate stretching of its tendon. Tendons join muscles together. If the exertion is sustained, the tendon will continue to stretch. Relaxation of the muscle will result in a rapid recovery of the tendon followed by a slowed recovery. If the initial stretching was within certain limits, the tendon will recover to its initial unloaded length (Fung 1972).

The strength of tendons belies the delicacy of the underlying physiological mechanisms by which they are nourished and heal. Interspersed within the tendon matrix are living cells, nerve endings and blood vessels. Nerve endings provide information to the central nervous system for motor control and warning of acute overload. Blood vessels play an important role in the nourishment of some areas of the tendon. Some areas of tendons are avascular and rely on diffusion from fluid secreted by synovial linings of outer tendon sheaths (Gelberman et al. 1987). Synovial fluid also lubricates movements of the tendons. Synovial sheaths are found at locations where tendons come into contact with adjacent anatomical surfaces.

Excessive elastic or viscous deformation of the tendon can damage these tissues and impair their ability to heal. It is hypothesized that deformation may impede or arrest circulation and nourishment of tendons (Hagberg 1982; Viikari-Juntura 1984; Armstrong et al. 1993). Without adequate circulation, cell viability will be impaired and the tendon’s capacity to heal will be reduced. Tendon deformation can lead to small tears that further contribute to cell damage and inflammation. If circulation is restored and the tendon is given adequate recovery time, the damaged tissues will heal (Gelberman et al. 1987; Daniel and Breidenbach 1982; Leadbetter 1989).

It has been shown that tendon disorders occur in predictable patterns (Armstrong et al. 1993). Their locations occur in those parts of the body associated with high stress concentrations (e.g., in the tendons of the supraspinatus, the biceps, the extrinsic finger flexor and extensor muscles). Also, there is an association between the intensity of work and the prevalence of tendon disorders. This pattern also has been shown for amateur and professional athletes (Leadbetter 1989). The common factors in both workers and athletes are repetitive exertions and overloading of the muscle-tendon units.

Within certain limits, the injuries produced by mechanical loading will heal. The healing process is divided into three stages: inflammatory, proliferatory and remodelling (Gelberman et al. 1987; Daniel and Breidenbach 1982). The inflammatory stage is characterized by the presence of polymorphonuclear cell infilt- ration, capillary budding and exudation, and lasts for several days. The proliferatory stage is characterized by the proliferation of fibroblasts and randomly oriented collagen fibres between areas of the wound and adjacent tissues, and lasts for several weeks. The remodelling phase is characterized by the alignment of the collagen fibres along the direction of loading, and lasts for several months. If the tissues are re-injured before healing is complete, recovery may be delayed and the condition may worsen (Leadbetter 1989). Normally healing leads to a strengthening or adaptation of the tissue to mechanical stress.

Until optimal tendon loading regimes are determined, employers should monitor workers for signs or symptoms of tendon disorders so that they can intervene with work modifications to prevent further injuries. Jobs should be inspected for conspicuous risk factors any time an upper limb problem is identified or suspected. Jobs also should be inspected any time there is a change in the work standard, procedure or tooling, to insure that risk factors are minimized.