Perception and control of orientation and motion of the body in space is achieved by a system that involves simultaneous input from three sources: vision, the vestibular organ in the inner ear and sensors in the muscles, joints and skin that provide somatosensory or “proprioceptive” information about movement of the body and physical contact with the environment (figure 1). The combined input is integrated in the central nervous system which generates appropriate actions to restore and maintain balance, coordination and well-being. Failure to compensate in any part of the system may produce unease, dizziness and unsteadiness that can produce symptoms and/or falls.

Figure 1.  An outline of the principal elements of the balance system 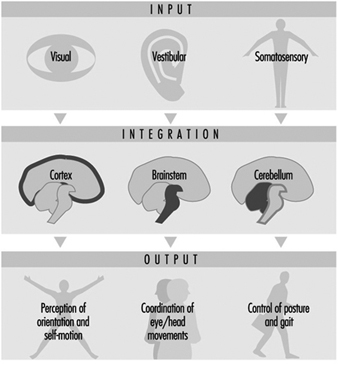 The vestibular system directly registers the orientation and movement of the head. The vestibular labyrinth is a tiny bony structure located in the inner ear, and comprises the semicircular canals filled with fluid (endolymph) and the otoliths (Figure 6). The three semicircular canals are positioned at right angles so that acceleration can be detected in each of the three possible planes of angular motion. During head turns, the relative movement of the endolymph within the canals (caused by inertia) results in deflection of the cilia projecting from the sensory cells, inducing a change in the neural signal from these cells (figure 2). The otoliths contain heavy crystals (otoconia) which respond to changes in the position of the head relative to the force of gravity and to linear acceleration or deceleration, again bending the cilia and so altering the signal from the sensory cells to which they are attached. 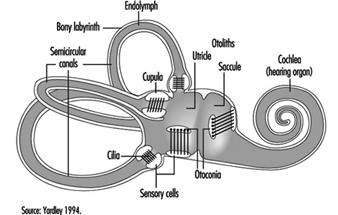 Figure 3. Schematic representation of the biomechanical effects of a ninety-degree (forward) inclination of the head. 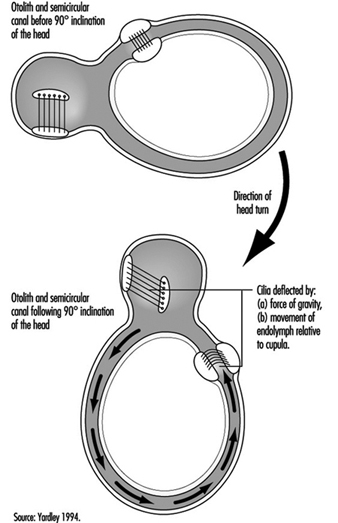 The central interconnections within the balance system are extremely complex; information from the vestibular organs in both ears is combined with information derived from vision and the somatosensory system at various levels within the brainstem, cerebellum and cortex (Luxon 1984).

This integrated information provides the basis not only for the conscious perception of orientation and self-motion, but also the preconscious control of eye movements and posture, by means of what are known as the vestibuloocular and vestibulospinal reflexes. The purpose of the vestibuloocular reflex is to maintain a stable point of visual fixation during head movement by automatically compensating for the head movement with an equivalent eye movement in the opposite direction (Howard 1982). The vestibulospinal reflexes contribute to postural stability and balance (Pompeiano and Allum 1988).

In normal circumstances, the input from the vestibular, visual and somatosensory systems is congruent, but if an apparent mismatch occurs between the different sensory inputs to the balance system, the result is a subjective sensation of dizziness, disorientation, or illusory sense of movement. If the dizziness is prolonged or severe it will be accompanied by secondary symptoms such as nausea, cold sweating, pallor, fatigue, and even vomiting. Disruption of reflex control of eye movements and posture may result in a blurred or flickering visual image, a tendency to veer to one side when walking, or staggering and falling. The medical term for the disorientation caused by balance system dysfunction is “vertigo,” which can be caused by a disorder of any of the sensory systems contributing to balance or by faulty central integration. Only 1 or 2% of the population consult their doctor each year on account of vertigo, but the incidence of dizziness and imbalance rises steeply with age. “Motion sickness” is a form of disorientation induced by artificial environmental conditions with which our balance system has not been equipped by evolution to cope, such as passive transport by car or boat (Crampton 1990).

The most common causes of vestibular dysfunction are infection (vestibular labyrinthitis or neuronitis), and benign positional paroxysmal vertigo (BPPV) which is triggered principally by lying on one side. Recurrent attacks of severe vertigo accompanied by loss of hearing and noises (tinnitus) in one ear are typical of a syndrome known as Menière’s disease. Vestibular damage can also result from disorders of the middle ear (including bacterial disease, trauma and cholesteatoma), ototoxic drugs (which should be used only in medical emergencies), and head injury.

Disorders of the neck, which may alter the somatosensory information relating to head movement or interfere with the blood-supply to the vestibular system, are believed by many clinicians to be a cause of vertigo. Common aetiologies include whiplash injury and arthritis. Sometimes unsteadiness is related to a loss of feeling in the feet and legs, which may be caused by diabetes, alcohol abuse, vitamin deficiency, damage to the spinal cord, or a number of other disorders. Occasionally the origin of feelings of giddiness or illusory movement of the environment can be traced to some distortion of the visual input. An abnormal visual input may be caused by weakness of the eye muscles, or may be experienced when adjusting to powerful lenses or to bifocal glasses.

Although most cases of vertigo are attributable to peripheral (mainly vestibular) pathology, symptoms of disorientation can be caused by damage to the brainstem, cerebellum or cortex. Vertigo due to central dysfunction is almost always accompanied by some other symptom of central neurological disorder, such as sensations of pain, tingling or numbness in the face or limbs, difficulty speaking or swallowing, headache, visual disturbances, and loss of motor control or loss of consciousness. The more common central causes of vertigo include disorders of the blood supply to the brain (ranging from migraine to strokes), epilepsy, multiple sclerosis, alcoholism, and occasionally tumours. Temporary dizziness and imbalance is a potential side-effect of a vast array of drugs, including widely-used analgesics, contraceptives, and drugs used in the control of cardiovascular disease, diabetes and Parkinson’s disease, and in particular the centrally-acting drugs such as stimulants, sedatives, anti-convulsants, anti-depressants and tranquillizers (Ballantyne and Ajodhia 1984).

All cases of vertigo require medical attention in order to ensure that the (relatively uncommon) dangerous conditions which can cause vertigo are detected and appropriate treatment is given. Medication can be given to relieve symptoms of acute vertigo in the short term, and in rare cases surgery may be required. However, if the vertigo is caused by a vestibular disorder the symptoms will generally subside over time as the central integrators adapt to the altered pattern of vestibular input—in the same way that sailors continuously exposed to the motion of waves gradually acquire their “sea legs”. For this to occur, it is essential to continue to make vigorous movements which stimulate the balance system, even though these will at first cause dizziness and discomfort. Since the symptoms of vertigo are frightening and embarrassing, sufferers may need physiotherapy and psychological support to combat the natural tendency to restrict their activities (Beyts 1987; Yardley 1994).

Vertigo in the Workplace

Dizziness and disorientation, which may become chronic, is a common symptom in workers exposed to organic solvents; furthermore, long-term exposure can result in objective signs of balance system dysfunction (e.g., abnormal vestibular-ocular reflex control) even in people who experience no subjective dizziness (Gyntelberg et al. 1986; Möller et al. 1990). Changes in pressure encountered when flying or diving can cause damage to the vestibular organ which results in sudden vertigo and hearing loss requiring immediate treatment (Head 1984). There is some evidence that noise-induced hearing loss can be accompanied by damage to the vestibular organs (van Dijk 1986). People who work for long periods at computer screens sometimes complain of dizziness; the cause of this remains unclear, although it may be related to the combination of a stiff neck and moving visual input.

Unexpected attacks of vertigo, such as occur in Menière’s disease, can cause problems for people whose work involves heights, driving, handling dangerous machinery, or responsibility for the safety of others. An increased susceptibility to motion sickness is a common effect of balance system dysfunction and may interfere with travel.

Equilibrium is maintained by a complex multisensory system, and so disorientation and imbalance can result from a wide variety of aetiologies, in particular any condition which affects the vestibular system or the central integration of perceptual information for orientation. In the absence of central neurological damage the plasticity of the balance system will normally enable the individual to adapt to peripheral causes of disorientation, whether these are disorders of the inner ear which alter vestibular function, or environments which provoke motion sickness. However, attacks of dizziness are often unpredictable, alarming and disabling, and rehabilitation may be necessary to restore confidence and assist the balance function.