Figure 1. The structure of the nail. 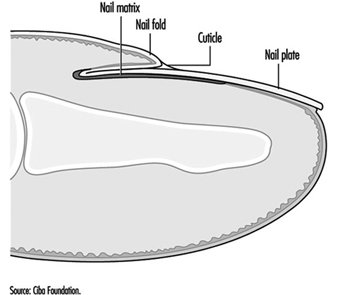 The most vulnerable parts of the nail are the nail fold and the area beneath the tip of the nail plate, although the nail plate itself may suffer direct physical or chemical traumata. Chemical substances or infective agents may penetrate under the nail plate at its free margin. Moisture and alkali may destroy the cuticle and allow the entry of bacteria and fungi which will cause inflammation of the paronychial tissue and produce secondary growth disturbance of the nail plate.

The most frequent causes of nail disease are chronic paronychia, ringworm, trauma, psoriasis, impaired circulation and eczema or other dermatitis. Paronychia is an inflammation of the nail fold. Acute paronychia is a painful suppurative condition requiring antibiotic and sometimes surgical treatment. Chronic paronychia follows loss of the cuticle which allows water, bacteria and Candida albicans to penetrate into the paronychial space. It is common among persons with intense exposure to water, alkaline substances and detergents, such as kitchen staff, cleaners, fruit and vegetable preparers and canners and housewives. Full recovery cannot be achieved until the integrity of the cuticle and eponychium sealing the paronychial space has been restored.

Exposure to cement, lime and organic solvents, and work such as that of a butcher or poulterer may also cause trauma of the cuticle and nail folds.

Any inflammation or disease of the nail matrix may result in dystrophy (distortion) of the nail plate, which is usually the symptom which has brought the condition to medical attention. Exposure to chilling cold, or the arterial spasm of Raynaud’s phenomenon, can also damage the matrix and produce nail dystrophy. Sometimes the damage is temporary and the nail dystrophy will disappear after removal of the cause and treatment of the inflammatory condition. (An example is shown in figure 2.) 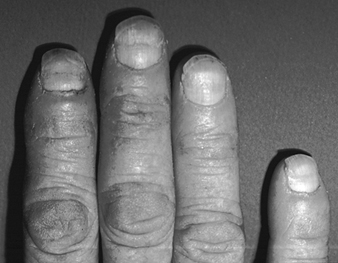 One cause of nail damage is the direct application of certain cosmetic preparations, such as base coats under nail polish, nail hardeners and synthetic nail dressings to the nail.

Some special occupations may cause nail damage. There has been a report of dystrophy due to handling the concentrated dipyridylium pesticide compounds paraquat and diquat. During the manufacture of selenium dioxide, a fine powder of this substance may get under the fringe of the nail plate and cause intense irritation and necrosis of the finger tip and damage to the nail plate. Care should be taken to warn workers of this hazard and advise them always to clean the subungual areas of their fingers each day.

Certain types of allergic contact dermatitis of the finger tips frequently result in secondary nail dystrophy. Six common sensitizers which will do this are:

The diagnosis can be confirmed by a positive patch test. The condition of the skin and nails will recover when contact ceases.

In many cases nails can be safeguarded by the use of suitable hand protection. However, where hand exposure exists, nails should receive adequate care, consisting essentially of preserving the cuticle and protecting the subungual area. The skin under the free margin of the nails should be cleaned daily in order to remove foreign debris or chemical irritants. Where barrier creams or lotions are employed, care should be taken to ensure that the cuticle and the area under the free margin are coated.

To preserve the intact cuticle it is necessary to avoid excessive manicure or trauma, maceration by prolonged exposure to water, and dissolution by repeated exposure to alkali, solvent and detergent solutions.