As in many other countries, risk due to exposure to chemicals is regulated in Japan according to the category of chemicals concerned, as listed in table 1. The governmental ministry or agency in charge varies. In the case of industrial chemicals in general, the major law that applies is the Law Concerning Examination and Regulation of Manufacture, Etc. of Chemical Substances, or Chemical Substances Control Law (CSCL) for short. The agencies in charge are the Ministry of International Trade and Industry and the Ministry of Health and Welfare. In addition, the Labour Safety and Hygiene Law (by the Ministry of Labour) provides that industrial chemicals should be examined for possible mutagenicity and, if the chemical in concern is found to be mutagenic, the exposure of workers to the chemical should be minimized by enclosure of production facilities, installation of local exhaust systems, use of protective equipment, and so on.

Abbreviations: MHW—Ministry of Health and Welfare; MAFF—Ministry of Agriculture, Forestry and Fishery; MITI—Ministry of International Trade and Industry; MOL—Ministry of Labour; STA—Science and Technology Agency.

Because hazardous industrial chemicals will be identified primarily by the CSCL, the framework of tests for hazard identification under CSCL will be described in this section.

The Concept of the Chemical SubstanceControl Law

The original CSCL was passed by the Diet (the parliament of Japan) in 1973 and took effect on 16 April 1974. The basic motivation for the Law was the prevention of environmental pollution and resulting human health effects by PCBs and PCB-like substances. PCBs are characterized by (1) persistency in the environment (poorly biodegradable), (2) increasing concentration as one goes up the food chain (or food web) (bioaccumulation) and (3) chronic toxicity in humans. Accordingly, the Law mandated that each industrial chemical be examined for such characteristics prior to marketing in Japan. In parallel with the passage of the Law, the Diet decided that the Environment Agency should monitor the general environment for possible chemical pollution. The Law was then amended by the Diet in 1986 (the amendment taking effect in 1987) in order to harmonize with actions of the OECD regarding health and the environment, the lowering of non-tariff barriers in international trade and especially the setting of a minimum premarketing set of data (MPD) and related test guidelines. The amendment was also a reflection of observation at the time, through monitoring of the environment, that chemicals such as trichloroethylene and tetrachloroethylene, which are not highly bioaccumulating although poorly biodegradable and chronically toxic, can pollute the environment; these chemical substances were detected in groundwater nationwide.

The Law classifies industrial chemicals into two categories: existing chemicals and new chemicals. The existing chemicals are those listed in the “Existing Chemicals Inventory” (established with the passage of the original Law) and number about 20,000, the number depending on the way some chemicals are named in the inventory. Chemicals not in the inventory are called new chemicals. The government is responsible for hazard identification of the existing chemicals, whereas the company or other entity that wishes to introduce a new chemical into the market in Japan is responsible for hazard identification of the new chemical. Two governmental ministries, the Ministry of Health and Welfare (MHW) and the Ministry of International Trade and Industry (MITI), are in charge of the Law, and the Environment Agency can express its opinion when necessary. Radioactive substances, specified poisons, stimulants and narcotics are excluded because they are regulated by other laws.

1 No authorization in practice.

Testing is not required for a new chemical with a limited use amount (i.e., less than 1,000 kg/company/year and less than 1,000 kg/year for all of Japan). Polymers are examined following the high molecular-weight compound flow scheme, which is developed with an assumption that chances are remote for absorption into the body when the chemical has a molecular weight of greater than 1,000 and is stable in the environment.

Results of Classification of Industrial Chemicals,as of 1996

In the 26 years from the time CSCL went into effect in 1973 to the end of 1996, 1,087 existing chemical items were examined under the original and amended CSCL. Among the 1,087, nine items (some are identified by generic names) were classified as “Class 1 specified chemical substance”. Among those remaining, 36 were classified as “designated”, of which 23 were reclassified as “Class 2 specified chemical substance” and another 13 remained as “designated”. The names of Class 1 and 2 specified chemical substances are listed in figure 2. It is clear from the table that most of the Class 1 chemicals are organochlorine pesticides in addition to PCB and its substitute, except for one seaweed killer. A majority of the Class 2 chemicals are seaweed killers, with the exceptions of three once widely used chlorinated hydrocarbon solvents. 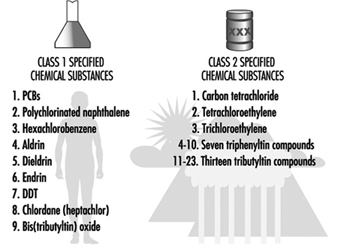 In the same period from 1973 to the end of 1996, about 2,335 new chemicals were submitted for approval, of which 221 (about 9.5%) were identified as “designated”, but none as Class 1 or 2 chemicals. Other chemicals were considered “safe” and approved for manufacturing or import.