The Physical Basis of Work in Heat

The human body exchanges heat with its environment by various pathways: conduction across the surfaces in contact with it, convection and evaporation with the ambient air, and radiation with the neighbouring surfaces.

Conduction is the transmission of heat between two solids in contact. Such exchanges are observed between the skin and clothing, footwear, pressure points (seat, handles), tools and so on. In practice, in the mathematical calculation of thermal balance, this heat flow by conduction is approximated indirectly as a quantity equal to the heat flow by convection and radiation which would take place if these surfaces were not in contact with other materials.

Convection is the transfer of heat between the skin and the air surrounding it. If the skin temperature, tsk, in units of degrees Celsius (°C), is higher than the air temperature (ta), the air in contact with the skin is heated and consequently rises. Air circulation, known as natural convection, is thus established at the surface of the body. This exchange becomes greater if the ambient air passes over the skin at a certain speed: the convection becomes forced. The heat flow exchanged by convection, C, in units of watts per square metre (W/m2), can be estimated by:

where hc is the coefficient of convection (W/°C m2), which is a function of the difference between tsk and ta in the case of natural convection, and of the air velocity Va (in m/s) in forced convection; FclC is the factor by which clothing reduces convection heat exchange.

Every body emits electromagnetic radiation, the intensity of which is a function of the fourth power of its absolute temperature T (in degrees Kelvin—K). The skin, whose temperature may be between 30 and 35°C (303 and 308K), emits such radiation, which is in the infrared zone. Moreover, it receives the radiation emitted by neighbouring surfaces. The thermal flow exchanged by radiation, R (in W/m2), between the body and its surroundings may be described by the following expression:

AR/AD is the fraction of the body surface taking part in the ex- changes, which is of the order of 0.66, 0.70 or 0.77, depending upon whether the subject is crouching, seated or standing

FclR is the factor by which clothing reduces radiation heat exchange

Tsk (in K) is the mean skin temperature

Tr (in K) is the mean radiant temperature of the environment —that is, the uniform temperature of a black mat sphere of large diameter that would surround the subject and would exchange with it the same quantity of heat as the real environment.

This expression may be replaced by a simplified equation of the same type as that for exchanges by convection:

where hr is the coefficient of exchange by radiation (W/°C m2).

Every wet surface has on it a layer of air saturated with water vapour. If the atmosphere itself is not saturated, the vapour diffuses from this layer towards the atmosphere. The layer then tends to be regenerated by drawing on the heat of evaporation (0.674 Watt hour per gram of water) at the wet surface, which cools. If the skin is entirely covered with sweat, evaporation is maximal (Emax) and depends only on the ambient conditions, according to the following expression:

he is the coefficient of exchange by evaporation (W/m2kPa)

Psk,s is the saturated pressure of water vapour at the temperature of the skin (expressed in kPa)

Fpcl is the factor of reduction of exchanges by evaporation due to clothing.

A correction factor operates in the calculation of heat flow by convection, radiation and evaporation so as to take account of clothing. In the case of cotton clothing, the two reduction factors FclC and FclR may be determined by:

hc is the coefficient of exchange by convection

hr is the coefficient of exchange by radiation

Icl is the effective thermal isolation (m2/W) of clothing.

As regards the reduction of heat transfer by evaporation, the correction factor Fpcl is given by the following expression:

The thermal insulation of the clothing Icl is expressed in m2/W or in clo. An insulation of 1 clo corresponds to 0.155 m2/W and is provided, for example, by normal town wear (shirt, tie, trousers, jacket, etc.).

ISO standard 9920 (1994) gives the thermal insulation provided by different combinations of clothing. In the case of special protective clothing that reflects heat or limits permeability to vapour under conditions of heat exposure, or absorbs and insulates under conditions of cold stress, individual correction factors must be used. To date, however, the problem remains poorly understood and the mathematical predictions remain very approximate.

Evaluation of the Basic Parameters of the Work Situation

As seen above, thermal exchanges by convection, radiation and evaporation are a function of four climatic parameters—the air temperature ta in °C, the humidity of the air expressed by its partial vapour pressure Pa in kPa, the mean radiant temperature tr in °C, and the air velocity Va in m/s. The appliances and methods for measuring these physical parameters of the environment are the subject of ISO standard 7726 (1985), which describes the different types of sensor to use, specifies their range of measurement and their accuracy, and recommends certain measurement procedures. This section summarizes part of the data of that standard, with particular reference to the conditions of use of the most common appliances and apparatus.

The air temperature (ta) must be measured independent of any thermal radiation; the accuracy of the measurement should be ±0.2ºC within the range of 10 to 30ºC, and ±0.5 °C outside that range.

There are numerous types of thermometers on the market. Mercury thermometers are the most common. Their advantage is accuracy, provided that they have been correctly calibrated originally. Their main disadvantages are their lengthy response time and lack of automatic recording ability. Electronic thermometers, on the other hand, generally have a very short response time (5 s to 1 min) but may have calibration problems.

Whatever the type of thermometer, the sensor must be protected against radiation. This is generally ensured by a hollow cylinder of shiny aluminium surrounding the sensor. Such protection is ensured by the psychrometer, which will be mentioned in the next section.

The humidity of the air may be characterized in four different ways:

1.      the dewpoint temperature: the temperature to which the air must be cooled to become saturated with humidity (td, °C)

2.      the partial pressure of water vapour: the fraction of atmospheric pressure due to water vapour (Pa, kPa)

where PS,ta is the saturated vapour pressure associated with the air temperature

4.      the wet bulb temperature (tw), which is the lowest temperature attained by a wet sleeve protected against radiation and ventilated at more than 2 m/s by the ambient air.

All these values are connected mathematically.

The saturated water vapour pressure PS,t at any temperature t is given by:

while the partial pressure of water vapour is connected to the temperature by:

where PS,tw is the saturated vapour pressure at the wet bulb temperature.

The psychrometric diagram (figure 1) allows all these values to be combined. It comprises: 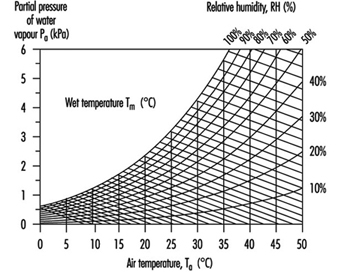 The mean radiant temperature (tr) has been defined previously; it can be determined in three different ways:

1.      from the temperature measured by the black sphere thermometer

2.      from the plane radiant temperatures measured along three perpendicular axes

3.      by calculation, integrating the effects of the different sources of radiation.

Only the first technique will be reviewed here.

The black sphere thermometer consists of a thermal probe, the sensitive element of which is placed at the centre of a completely closed sphere, made of a metal that is a good conductor of heat (copper) and painted matt black so as to have a coefficient of absorption in the infrared zone close to 1.0. The sphere is positioned in the workplace and subjected to exchanges by convection and radiation. The temperature of the globe (tg) then depends on the mean radiant temperature, the air temperature and the air velocity.

For a standard black globe 15 cm in diameter, the mean temperature of radiation can be calculated from the temperature of the globe on the basis of the following expression:

In practice, the need must be stressed to maintain the emissivity of the globe close to 1.0 by carefully repainting it matt black.

The main limitation of this type of globe is its long response time (of the order of 20 to 30 min, depending on the type of globe used and the ambient conditions). The measurement is valid only if the conditions of radiation are constant during this period of time, and this is not always the case in an industrial setting; the measurement is then inaccurate. These response times apply to globes 15 cm in diameter, using ordinary mercury thermometers. They are shorter if sensors of smaller thermal capacity are used or if the diameter of the globe is reduced. The equation above must therefore be modified to take account of this difference in diameter.

The WBGT index makes direct use of the temperature of the black globe. It is then essential to use a globe 15 cm in diameter. On the other hand, other indices make use of the mean radiant temperature. A smaller globe can then be selected to reduce the response time, provided that the equation above is modified to take account of it. ISO standard 7726 (1985) allows for an accuracy of ±2ºC in the measurement of tr between 10 and 40ºC, and ±5ºC outside that range.

The air velocity must be measured disregarding the direction of air flow. Otherwise, the measurement must be undertaken in three perpendicular axes (x, y and z) and the global velocity calculated by vectorial summation:

The range of measurements recommended by ISO standard 7726 extends from 0.05 to 2 m/s The accuracy required is 5%. It should be measured as a 1- or 3-min average value.

There are two categories of appliances for measuring air velo-city: anemometers with vanes, and thermal anemometers.

The measurement is carried out by counting the number of turns made by the vanes during a certain period of time. In this way the mean velocity during that period of time is obtained in a discontinuous manner. These anemometers have two main disadvantages:

These appliances are in fact complementary to vane anemometers in the sense that their dynamic range extends essentially from 0 to 1 m/s. They are appliances giving an instantaneous estimate of speed at one point of space: it is therefore necessary to use mean values in time and space. These appliances are also often very directional, and the remarks above also apply. Finally, the measurement is correct only from the moment when the temperature of the appliance has reached that of the environment to be evaluated.