The most familiar form of electromagnetic energy is sunlight. The frequency of sunlight (visible light) is the dividing line between the more potent, ionizing radiation (x rays, cosmic rays) at higher frequencies and the more benign, non-ionizing radiation at lower frequencies. There is a spectrum of non-ionizing radiation. Within the context of this chapter, at the high end just below visible light is infrared radiation. Below that is the broad range of radio frequencies, which includes (in descending order) microwaves, cellular radio, television, FM radio and AM radio, short waves used in dielectric and induction heaters and, at the low end, fields with power frequency. The electromagnetic spectrum is illustrated in figure 1.

Just as visible light or sound permeates our environment, the space where we live and work, so do the energies of electromagnetic fields. Also, just as most of the sound energy we are exposed to is created by human activity, so too are the electromagnetic energies: from the weak levels emitted from our everyday electrical appliances—those that make our radio and TV sets work—to the high levels that medical practitioners apply for beneficial purposes—for example, diathermy (heat treatments). In general, the strength of such energies decreases rapidly with distance from the source. Natural levels of these fields in the environment are low.

Non-ionizing radiation (NIR) incorporates all radiation and fields of the electromagnetic spectrum that do not have enough energy to produce ionization of matter. That is, NIR is incapable of imparting enough energy to a molecule or atom to disrupt its structure by removing one or more electrons. The borderline between NIR and ionizing radiation is usually set at a wavelength of approximately 100 nanometres.

As with any form of energy, NIR energy has the potential to interact with biological systems, and the outcome may be of no significance, may be harmful in different degrees, or may be beneficial. With radiofrequency (RF) and microwave radiation, the main interaction mechanism is heating, but in the low-frequency part of the spectrum, fields of high intensity may induce currents in the body and thereby be hazardous. The interaction mechanisms for low-level field strengths are, however, unknown.

Fields at frequencies below about 300 MHz are quantified in terms of electric field strength (E) and magnetic field strength (H). E is expressed in volts per metre (V/m) and H in amperes per metre (A/m). Both are vector fields—that is, they are characterized by magnitude and direction at each point. For the low-frequency range the magnetic field is often expressed in terms of the flux density, B, with the SI unit tesla (T). When the fields in our daily environment are discussed, the subunit microtesla (μT) is usually the preferred unit. In some literature the flux density is expressed in gauss (G), and the conversion between these units is (for fields in air):

Reviews of concepts, quantities, units and terminology for non-ionizing radiation protection, including radiofrequency radiation, are available (NCRP 1981; Polk and Postow 1986; WHO 1993).

The term radiation simply means energy transmitted by waves. Electromagnetic waves are waves of electric and magnetic forces, where a wave motion is defined as propagation of disturbances in a physical system. A change in the electric field is accompanied by a change in the magnetic field, and vice versa. These phenomena were described in 1865 by J.C. Maxwell in four equations which have come to be known as Maxwell’s Equations.

Electromagnetic waves are characterized by a set of parameters that include frequency (f), wavelength (λ), electric field strength, magnetic field strength, electric polarization (P) (the direction of the E field), velocity of propagation (c) and Poynting vector (S). Figure 2  illustrates the propagation of an electromagnetic wave in free space. The frequency is defined as the number of complete changes of the electric or magnetic field at a given point per second, and is expressed in hertz (Hz). The wavelength is the distance between two consecutive crests or troughs of the wave (maxima or minima). The frequency, wavelength and wave velocity (v) are interrelated as follows:

Figure 2. A plane wave propagating with the speed of light in the x-direction 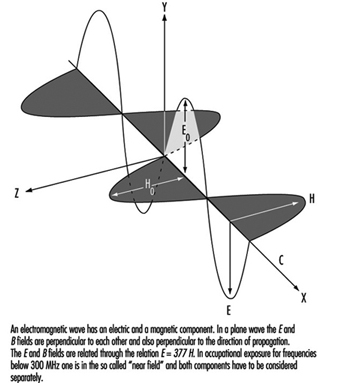 The velocity of an electromagnetic wave in free space is equal to the velocity of light, but the velocity in materials depends on the electrical properties of the material—that is, on its permittivity (ε) and permeability (μ). The permittivity concerns the material interactions with the electric field, and the permeability expresses the interactions with the magnetic field. Biological substances have permittivities that differ vastly from that of free space, being dependant on wavelength (especially in the RF range) and tissue type. The permeability of biological substances, however, is equal to that of free space.

In free space, Z= 120π ≈ 377Ω but otherwise Z depends on the permittivity and permeability of the material the wave is travelling through.

Energy transfer is described by the Poynting vector, which represents the magnitude and direction of the electromagnetic flux density:

For a propagating wave, the integral of S over any surface represents the instantaneous power transmitted through this surface (power density). The magnitude of the Poynting vector is expressed in watts per square metre (W/m2) (in some literature the unit mW/cm2 is used—the conversion to SI units is 1 mW/cm2 = 10 W/m2) and for plane waves is related to the values of the electric and magnetic field strengths:

Not all exposure conditions encountered in practice can be represented by plane waves. At distances close to sources of radio-frequency radiation the relationships characteristic of plane waves are not satisfied. The electromagnetic field radiated by an antenna can be divided into two regions: the near-field zone and the far-field zone. The boundary between these zones is usually put at:

where a is the greatest dimension of the antenna.

In the near-field zone, exposure has to be characterized by both the electric and the magnetic fields. In the far-field one of these suffices, as they are interrelated by the above equations involving E and H. In practice, the near-field situation is often realized at frequencies below 300 Mhz.

Exposure to RF fields is further complicated by interactions of electromagnetic waves with objects. In general, when electromagnetic waves encounter an object some of the incident energy is reflected, some is absorbed and some is transmitted. The proportions of energy transmitted, absorbed or reflected by the object depend on the frequency and polarization of the field and the electrical properties and shape of the object. A superimposition of the incident and reflected waves results in standing waves and spatially non-uniform field distribution. Since waves are totally reflected from metallic objects, standing waves form close to such objects.

Since the interaction of RF fields with biological systems depends on many different field characteristics and the fields encountered in practice are complex, the following factors should be considered in describing exposures to RF fields:

For exposure to low-frequency magnetic fields it is still not clear whether the field strength or flux density is the only important consideration. It may turn out that other factors are also important, such as the exposure time or the rapidity of the field changes.

The term electromagnetic field (EMF), as it is used in the news media and popular press, usually refers to electric and magnetic fields at the low-frequency end of the spectrum, but it can also be used in a much broader sense to include the whole spectrum of electromagnetic radiation. Note that in the low-frequency range the E and B fields are not coupled or interrelated in the same way that they are at higher frequencies, and it is therefore more accurate to refer to them as “electric and magnetic fields” rather than EMFs.