Environmental safety and health auditing developed in the early 1970s, largely among companies operating in environmentally intensive sectors such as oils and chemicals. Since then environmental auditing has spread rapidly with a corresponding development of the approaches and techniques adopted. Several factors have influenced this growth.

What is an Environmental Audit?

It is important to draw the distinction between auditing and techniques such as environmental impact assessment (EIA). The latter assesses the potential environmental effects of a proposed facility. The essential purpose of an environmental audit is the systematic scrutiny of environmental performance throughout a company’s existing operations. At best, an audit is a comprehensive examination of management systems and facilities; at worst, it is a superficial review.

a management tool comprising a systematic, documented periodic and objective evaluation of how well environmental organization, management and equipment are performing, with the aim of helping safeguard the environment by:

(i) facilitating management control of environmental practices and

(ii) assessing compliance with company policies which would include meeting regulatory requirements.

Scope of the Audit

As the prime objective of audits is to test the adequacy of existing management systems, they fulfil a fundamentally different role from the monitoring of environmental performance. Audits can address one topic, or a whole range of issues. The greater the scope of the audit, the greater will be the size of the audit team, the time spent onsite and the depth of investigation. Where international audits need to be carried out by a central team, there can be good reasons for covering more than one area while onsite to minimize costs.

In addition, the scope of an audit can vary from simple compliance testing to a more rigorous examination, depending on the perceived needs of the management. The technique is applied not only to operational environmental, health and safety management, but increasingly also to product safety and product quality management, and to areas such as loss prevention. If the intention of auditing is to help ensure that these broad areas are managed properly, then all of these individual topics must be reviewed. Items which may be addressed in audits, including environment, health, safety and product safety are shown in table 1.

Although some companies have a regular (often annual) audit cycle, audits are primarily determined by need and priority. Thus not all facilities or aspects of a company will be assessed at the same frequency or to the same extent.

An audit is usually conducted by a team of people who will assemble factual information prior to and during a site visit, analyse the facts and compare them with the criteria for the audit, draw conclusions and report their findings. These steps are usually conducted within some kind of formal structure (an audit protocol), such that the process can be repeated reliably at other facilities and quality can be maintained. To ensure that an audit is effective, a number of key steps must be included. These are summarized and explained in table 2. 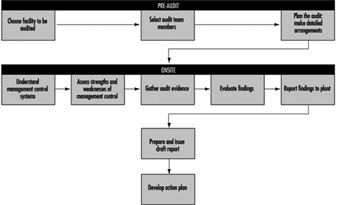 Criteria—what do you audit against?

An essential step in establishing an audit programme is to decide the criteria against which the audit will be conducted and to ensure that management throughout the organization knows what these criteria are. Typically criteria used for audits are:

Pre-audit steps include the administrative issues associated with planning the audit, selecting the personnel for the audit team (often from different parts of the company or from a specialized unit), preparing the audit protocol used by the organization and obtaining background information about the facility.

If auditing is new, the need for education of those involved in the audit process (the auditors or those being audited) should not be underestimated. This also applies to a multinational company extending an audit programme in its home country to subsidiaries abroad. In these situations, the time spent on explanation and education will pay dividends by ensuring that the audits are approached in a spirit of cooperation and are not seen as a threat by the local management.

When one major US company proposed extending its auditing programme to its operations in Europe, it was particularly concerned to ensure that the plants were properly briefed, that audit protocols were appropriate for European operations and that audit teams understood the relevant regulations. Pilot audits were conducted at selected plants. In addition, the audit process was introduced in a way that stressed the benefits of a cooperative rather than a “policing” approach.

Obtaining background information about a site and its processes can help to minimize the time spent onsite by the audit team and to focus its activities, thus saving resources.

The composition of the audit team will depend on the approach adopted by a particular organization. Where there is a lack of internal expertise, or where resources cannot be devoted to the audit activity, companies frequently use independent consultants to conduct the audits for them. Other companies employ a mix of in-house staff and external consultants on each team to ensure an “independent” view. Some large companies use only in-house staff for audits, and have environmental audit groups for this specific function. Many major companies have their own dedicated audit staff, but also include an independent consultant on many of the audits they carry out.

Following the onsite work, the next step is to prepare a draft report, which is reviewed by the plant management to confirm its accuracy. It is then distributed to senior management according to the requirements of the company.

The other key step is to develop an action plan to address the deficiencies. Some companies ask for recommendations for corrective action to be included in the formal audit report. The plant will then base its plan on implementing these recommendations. Other companies require the audit report to state the facts and the deficiencies, with no reference to how they should be corrected. It is then the responsibility of the plant management to devise the means of remedying the failings.

Once an audit programme is in place, future audits will include past reports—and progress in the implementation of any recommendations made therein—as part of their evidence.

Although the most widespread use of environmental auditing is to assess the environmental performance of a company’s operations, there are variations on the theme. Other types of audit used in particular circumstances include the following:

Issues audits. Some organizations apply the audit technique to a specific issue that may have implications for the whole company, such as waste. The UK-based oil multinational BP has carried out audits examining the impact of ozone depletion and the implications of public concern about tropical deforestation.

If environmental auditing is implemented in a constructive way there are many benefits to be derived from the process. The auditing approach described in this paper will help to: