Environmental awareness is leading to a rapid transformation of waste management practices. Interpretation of this change is necessary before examining in more detail the methods that are applied to waste management and to the handling of residues.

Modern principles of waste management are based on the paradigm of a geared connection between the biosphere and the anthroposphere. A global model (figure 1) relating these two spheres is based on the assumption that all materials drawn out of the environment end up as waste either directly (from the production sector) or indirectly (from the recycling sector), bearing in mind that all consumption waste flows back to this recycling sector either for recycling and/or for disposal.

Figure 1. A global model of the principles of waste management 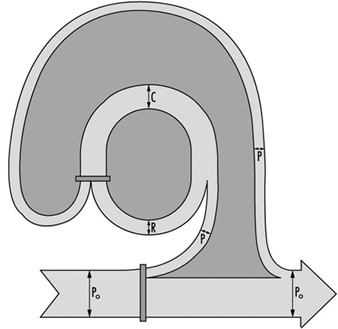 From this perspective, recycling must be defined broadly: from the recycling of whole objects (returnables), to the recycling of objects for some of their spare parts (e.g., cars, computers), to the production of new materials (e.g., paper and cardboard, tin cans) or the production of similar objects (recycling, downcycling and so on). Over the long term, this model can be visualized as a steady-state system wherein goods end up as waste after a few days or often a few years.

Deductions from the Model

Some major deductions can be made from this model, provided the various flows are clearly defined. For purposes of this model:

In other words, C* is a measure of the meshing of the connection between environment and anthroposphere. It is related to the efficiency of the production and of the recycling sectors. The relationship between C*, p and r, which is a utility function, can be charted as in figure 2, which shows the explicit trade-off between p and r, for a selected value of C*. 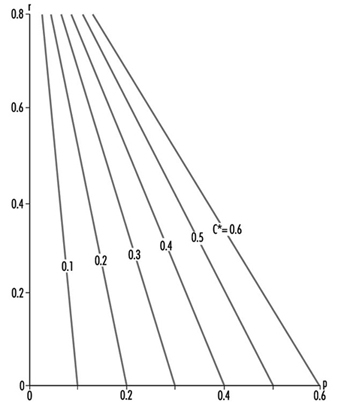 In the past, industry has developed along the line of an increase of the efficiency of production, p. Currently, in the late 1990s, the price of waste disposal through dispersion into the atmosphere, into bodies of water or into soils (uncontrolled tipping), or the burial of waste in confined deposit sites has increased very rapidly, as a result of increasingly stringent environmental protection standards. Under these conditions, it has become economically attractive to increase the effectiveness of recycling (in other words, to increase r). This trend will persist through the coming decades.

One important condition has to be met in order to improve the effectiveness of recycling: the waste to be recycled (in other words the raw materials of the second generation) must be as “pure” as possible (i.e., free of unwanted elements which would preclude the recycling). This will be achieved only through the implementation of a generalized policy of “non-mixing” of domestic, commercial and industrial waste at the source. This is often incorrectly termed sorting at the source. To sort is to separate; but the idea is precisely not to have to separate by storing the various categories of waste in separate containers or places until they are collected. The paradigm of modern waste management is non-mixing of waste at the source so as to enable an increase in the efficiency of recycling and thus to achieve a better ratio of goods per material drawn out of the environment.

Waste may be grouped into three major categories, depending on its production:

Waste can be also classified by legislative decree:

Collected by trucks, these wastes can be transported (directly or by road-to-road, road-to-rail or road-to-waterway transfer stations and long-distance transportation means) to a landfill, or to a treatment plant for material recovery (mechanical sorting, composting, biomethanization), or for energy recovery (grid or kiln incinerator, pyrolysis).

Treatment plants produce proportionally small quantities of residues which may be more hazardous for the environment than the original waste. For example, incinerators produce fly ashes with very high heavy metal and complex chemical content. These residues are often classified by legislation as hazardous waste and require appropriate management. Treatment plants differ from landfills because they are “open systems” with inputs and outputs, whereas landfills are essentially “sinks” (if one neglects the small quantity of leachate which deserves further treatment and the production of biogas, which may be an exploited source of energy on very large landfills).

The present trend, which also has commercial contributions, is for the producers of the waste sectors (e.g., cars, computers, machines) to be responsible for the recycling. Residues are then either hazardous waste or are similar to ordinary waste from enterprises.

The increasing prices of landfills is an incentive for a better sorting of such waste. Separation of the hazardous and burnable waste from the large quantity of inert materials allows the latter to be disposed of at a far lower rate than mixed waste.

Chemically hazardous waste must be treated through neutralization, mineralization, insolubilization or be made inert before it can be deposited in special landfills. Infectious waste is best burnt in special incinerators. Radioactive waste is subject to very strict legislation.

Production and consumption waste which cannot be recycled, down-cycled, reused or incinerated to produce energy must eventually be disposed of. The toxicity for the environment of these residues should be reduced according to the principle of “best available technology at an acceptable price.” After this treatment, the residues should be deposited in sites where they will not contaminate the water and the ecosystem and spread into the atmosphere, into the sea or into lakes and streams.

Deposits of waste are usually dated by the combination of multilayer isolation (using clay, geotextiles, plastic foils and so on), the diversion of all exogenous water, and waterproof cover layers. Permanent deposits need to be monitored for decades. Restrictions on land use of a deposit site must also be controlled for long periods of time. Controlled drainage systems for leachates or gases are necessary in most cases.

More biochemically stable and chemically inert residues from waste treatment require less stringent conditions for their final disposal, making it less difficult to find a deposit site for them within the region of production of the waste. Export of wastes or their residues, which always awakens NIMBY (Not In My Back Yard) reactions, might thus be avoided.