This article covers a group of accident models that all share the same basic design. The interplay between human, machine and environment, and the development of this interplay into potential hazards, dangers, damages and injuries, is envisaged by means of a sequence of questions derived and listed in a logical order. This sequence is then applied in a similar manner at different levels of analysis through the use of models. The first of these models was presented by Surry (1969). A few years later, a modified version was presented by the Swedish Work Environment Fund (1983) and received the fund’s sobriquet, WEF. A Swedish research team then evaluated the WEF model and suggested some further developments resulting in a third model.

These models are herein described one by one, with comments on the reasons for the changes and developments undertaken. Finally, a tentative synthesis of the three models is proposed. Thus, a total of four models, with considerable similarities, are presented and discussed. Although this may seem confusing, it illustrates the fact that there is no model that is universally accepted as “The Model”. Among other things, there is an obvious conflict between simplicity and completeness with regard to accident models.

In 1969, Jean Surry published the book Industrial Accident Research—A Human Engineering Appraisal. This book contains a review of models and approaches predominantly applied in accident research. Surry grouped the theoretical and conceptual frameworks she identified into five different categories: (1) chain-of-multiple-events models, (2) epidemiological models, (3) energy-exchange models, (4) behaviour models, and (5) systems models. She concluded that none of these models is incompatible with any of the others; each simply stresses different aspects. This inspired her to combine the various frameworks into one comprehensive and general model. She made it clear, though, that her model should be regarded as provisional, without any pretensions of finality.

In Surry’s view, an accident can be described by a series of questions, forming a sequential hierarchy of levels, where the answers to each question determine whether an event turns out as an accident or not. Surry’s model (see figure 1) reflects the principles of human information processing, and is based upon the notion of an accident as a deviation from an intended process. It has three principal stages, linked by two similar cycles. 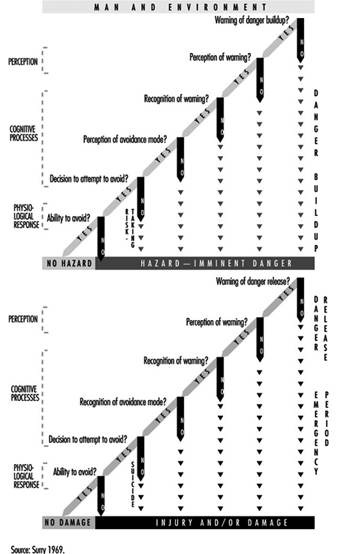 The first stage views human beings in their total environment, including all relevant environmental and human parameters. The potential injury agent is also described at this stage. It is assumed that, through the actions (or non-actions) of the individual, dangers grow out of such an environment. For the purpose of analysis a “danger-build-up” cycle is constituted by the first sequence of questions. If there are negative responses to any of these questions, the danger in question will become imminent.

The second sequence of questions, the “danger-release cycle”, links the level of danger to possible alternative outcomes when the danger is triggered. It should be noted that by following different routes through the model, it is possible to distinguish between deliberate (or consciously accepted) dangers and unintentional negative outcomes. The differences between “accident-like” unsafe acts, mishaps (and so on) and completed accidents are also clarified by the model.

In 1973, a committee set up by the Swedish Work Environment Fund to review the state of occupational accident research in Sweden launched a “new” model and promoted it as a universal tool that should be employed for all research in this field. It was announced as a synthesis of existing behavioural, epidemiological and systems models, and was also said to encompass all relevant aspects of prevention. Reference was made to Surry, among others, but without mention of the fact that the proposed model was almost identical to hers. Only a few changes had been made, all for the purpose of improvement.

As often occurs when scientific models and perspectives are recommended by central agencies and authorities, the model is subsequently adopted in only a few projects. Nevertheless, the report issued by the WEF contributed to a rapidly rising interest in modelling and theory development among Swedish and Scandinavian accident researchers, and several new accident models emerged within a short period.

The point of departure in the WEF model (in contrast to Surry’s “man and environment” level) lies in the concept of danger, here limited to “objective danger” as opposed to the subjective perception of danger. Objective danger is defined as an integral part of a given system, and is basically determined by the amount of resources available for investment in safety. Increasing a system’s tolerance to human variability is mentioned as a way of reducing danger.

When an individual comes into contact with a certain system and its dangers, a process begins. Due to system features and individual behaviour, a risk situation may arise. What is most important (as regards the properties of systems) according to the authors, is how dangers are indicated through various kinds of signals. Risk imminence is determined depending on the individual’s perception, understanding and actions in relation to these signals.

The next sequence in the process, which is in principle identical to Surry’s, is directly related to the event and whether it will lead to injury or not. If the danger is released, can it be, in fact, observed? Is it perceived by the individual in question and is he or she able to avoid injury or damage? Answers to such questions explain the kind and degree of harmful outcomes that emanate from the critical period.

The WEF model (figure 2) was seen as having four advantages: 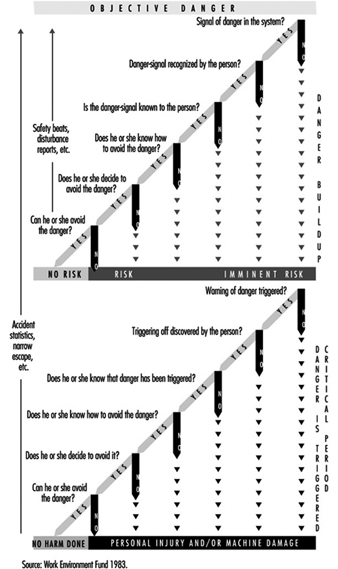 By the time the WEF report was issued, an epidemiological study on occupational accidents was under way in the city of Malmö, Sweden. The study was based on a modified version of the so-called Haddon Matrix, which cross-tabulates variables along two dimensions: time in terms of pre-accident, accident and post-accident phases; and the epidemiological trichotomy of host, agent (or vehicle/vector) and environment. Although such a model provides a good basis for data collection, it was found by the research team to be insufficient to understand and explain the causal mechanisms underlying accident and injury phenomena. The WEF model appeared to represent a new approach, and was therefore received with great interest. It was decided to conduct an immediate evaluation of the model by testing it on a random selection of 60 actual cases of occupational accidents that had been previously thoroughly investigated and documented by the Malmö group as a part of its ongoing study.

The results of the evaluation were summarized in four points:

Based on these remarks, the model was further developed by the research group in Malmö. The most important innovation was the addition of a third sequence of questions to complement the other two. This sequence was designed to analyse and explain the existence and nature of “danger” as an inherent feature of a human-machine system. General principles from systems theory and control technology were applied.

Moreover, the work process, thus understood in terms of human-machine-environment interaction, should also be seen in the light of its organizational and structural contexts at both company and societal levels. The need to take personal characteristics and motives for the actual activity into consideration, as well as for the individual to carry out that activity, was also indicated. (See figure 3.)

Figure 3. The EF model developed by introduction of a new first sequence

In reconsidering these early models today, more than twenty years later, against the background of progress made concerning theories and models in accident research, they still seem surprisingly up-to-date and competitive.

The basic underlying assumption of the models—that accidents, as well as their causes, should be seen as deviations from intended processes—is still a dominant perspective (see, inter alia, Benner 1975; Kjellén and Larsson 1981).

The models make a clear distinction between the concept of injury as a health outcome and the concept of accident as a preceding occurrence. Moreover, they demonstrate that an accident is not just an “event”, but rather a process which can be analysed as a series of steps (Andersson 1991).

Many subsequent models have been designed as a number of “boxes”, organized in temporal or hierarchical order, and indicating various temporal phases or levels of analysis. Examples of these include the ISA model (Andersson and Lagerlöf 1983), the deviation model (Kjellén and Larsson 1981) and the so-called Finnish model (Tuominen and Saari 1982). Such levels of analysis are also clearly central to the models described here. But the sequence models also propose a theoretical instrument for analysing the mechanisms which link these levels together. Important contributions in this respect have been made by authors such as Hale and Glendon (1987) from a human factors perspective, and Benner (1975) from a systems point of view.

As clearly emerges when comparing these models, Surry did not give a key position to the concept of danger, as is done in the WEF model. Her starting point was the human-environment interaction, reflecting a broader approach similar to that suggested by the Malmö group. On the other hand, like the WEF committee, she did not refer to any further levels of analysis beyond the worker and environment, such as organizational or societal levels. Further, the comments from the Malmö study cited here in relation to the WEF model also seem relevant to Surry’s model.

A modern synthesis of the three models presented above might include fewer details on human information processing and more information on “upstream” conditions (further back in the casual “flow”) at organizational and societal levels. Key elements in a sequence of questions designed to address the relationship between the organizational and human-machine levels might be derived from modern principles of safety management, involving quality assurance methodologies (internal control and so on). Similarly, a sequence of questions for the connection between societal and organizational levels might involve modern principles of systems-oriented supervision and auditing. A tentative comprehensive model, based on Surry’s original design and including these additional elements, is outlined in figure 4.

Figure 4. Tentative comprehensive model on accident causation (based on Surry 1969 and descendants) 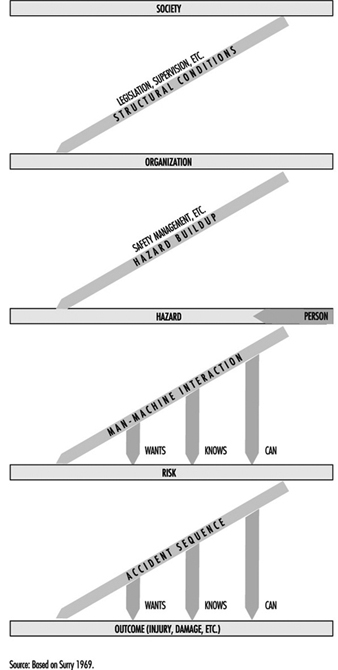