An occupational accident may be regarded as an abnormal or unwanted effect of the processes in an industrial system, or something which does not work as planned. Unwanted effects other than personal injury are also possible, such as material damage, accidental release of pollution to the environment, time delay or reduced product quality. The deviation model is rooted in systems theory. When applying the deviation model, accidents are analysed in terms of deviations.

The definition of deviations in relation to specified requirements coincides with the definition of nonconformities in the International Organization for Standardization’s ISO 9000 series of standards on quality management (ISO 1994). The value of a systems variable is classified as a deviation when it falls outside a norm. Systems variables are measurable characteristics of a system, and they can assume different values.

There are four different types of norms. These relate to: (1) specified requirements, (2) what has been planned, (3) what is normal or usual and (4) what is accepted. Each type of norm is characterized by the way it has been established and its degree of formalization.

Safety regulations, rules and procedures are examples of specified requirements. A typical example of a deviation from a specified requirement is a “human error”, which is defined as a transgression of a rule. The norms that relate to what is “normal or usual” and what is “accepted” are less formalized. They are typically applied in industrial settings, where the planning is oriented to outcome and the execution of the work is left to the discretion of the operators. An example of a deviation from an “accepted” norm is an “incidental factor”, which is an unusual event that may (or may not) result in an accident (Leplat 1978). A further example is an “unsafe act”, which traditionally was defined as a personal action violating a commonly accepted safe procedure (ANSI 1962).

In the application of the deviation model, the set or range of values of systems variables is divided into two classes, namely, normal and deviation. The distinction between normal and deviation may be problematic. Differences of opinion about what is normal may arise, for example, among workers, supervisors, management and systems designers. Another problem relates to the lack of norms in work situations which have not been encountered before (Rasmussen, Duncan and Leplat 1987). These differences of opinion and the lack of norms may in themselves contribute to an increased risk.

Time is a basic dimension in the deviation model. An accident is analysed as a process rather than as a single event or a chain of causal factors. The process develops through consecutive phases, so that there is a transition from normal conditions in the industrial system to abnormal conditions or a state of lack of control. Subsequently, a loss of control of energies in the system occurs and the damage or injury develops. Figure 1 shows an example of the analysis of an accident based on a model developed by the Occupational Accident Research Unit (OARU) in Stockholm, in relation to these transitions. 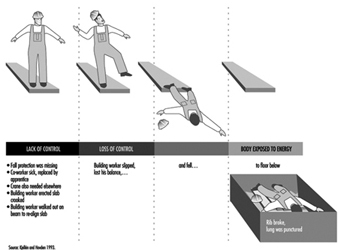 Each accident model has a unique focus, which is linked to an accident-prevention strategy. The deviation model puts the focus on the initial phase of the accident sequence, which is characterized by the state of abnormal conditions or lack of control. Accident prevention is accomplished through feedback where established information systems for production planning and control and safety management are used. The aim is to conduct a smooth operation with as few disturbances and improvisations as possible, so as to not increase the risk of accidents.

To illustrate the characteristics of the deviation model, a comparison is made with the energy model (Haddon 1980) which directs the focus of accident prevention on the later phases of the accident process—that is, the loss of control of energies and subsequent harm. Accident prevention is typically accomplished through limitation or control of energies in the system or by interposing barriers between the energies and the victim.

There are different taxonomies for the classification of deviations. These have been developed to simplify the collection, processing and feedback of data on deviations. Table 1  presents an overview.

Table 1. Examples of taxonomies for the classification of deviations

A classical taxonomy of deviations is the distinction between “unsafe act of persons” and “unsafe mechanical/physical conditions” (ANSI 1962). This taxonomy combines a classification with respect to duration and the subject-object split. The OARU model is based on an industrial engineering systems view (Kjellén and Hovden 1993) wherein each class of deviations is related to a typical system for production control. It follows, for example, that deviations related to work materials are controlled through material control, and technical deviations are controlled through inspection and maintenance routines. Stationary guards are typically controlled through safety inspections. Deviations that describe the loss of control of energies are characterized by the type of energy involved (Haddon 1980). A distinction is also made between failures in human and technical systems for the control of energies (Kjellén and Hovden 1993).

The Validity of the Deviation Concept

No general relationships exist between deviations and the risk of injury. Research results suggest, however, that some types of deviations are associated with an increased risk of accidents in certain industrial systems (Kjellén 1984). These include defective equipment, production disturbances, irregular workload and tools used for unusual purposes. The type and amount of energy that is involved in the uncontrolled energy flow are fairly good predictors of the consequences.

Application of the Deviation Model

Figure 2. Coverage of different tools for use in safety practice

For example, Safety sampling is a method for the control of deviations from safety rules through performance feedback to the workers. Positive effects of safety sampling on safe performance, as measured by the risk of accidents, have been reported (Saari 1992).

The deviation model has been applied in the development of tools for use in accident investigations. In the incidental factors analysis method, deviations of the accident sequence are identified and arranged in a logical tree structure (Leplat 1978). The OARU model has been the basis for the design of accident investigation forms and checklists and for the structuring of the accident investigation procedure. Evaluation research shows that these methods support a comprehensive and reliable charting and evaluation of deviations (see Kjellén and Hovden 1993 for a review). The deviation model has also inspired the development of methods for risk analysis.

Deviation analysis is a risk analysis method and encompasses three steps: (1) the summarizing of systems functions and operator activities and their division into subsections, (2) the examination of each activity to identify possible deviations and to assess the potential consequences of each deviation and (3) the development of remedies (Harms-Ringdahl 1993). The accident process is modelled as illustrated by figure 1 , and the risk analysis covers all three phases. Checklists similar to those applied in accident investigations are used. It is possible to integrate this method with design tasks; it is further effective in identifying needs for remedial actions.

Deviation models focus on the early part of the accident process, where there are disturbances in the operation. Prevention is accomplished through feedback control in order to achieve a smooth operation with few disturbances and improvisations that may result in accidents.