Rice is the staple food for Asian people; it is prepared by cooking or ground as flour for bread making, thus helping to feed the rest of the world population. Various kinds of rice are produced to suit the taste of the consumers. Rice cultivation is done either in marshy, lowland areas with plenty of water or in plateau or hilly regions where natural rainfall provides adequate amounts of water.

Rice can be cultivated either by hand or by partial or full mechanization, according to the technological development of the country and the need for productivity. Whatever kind of operation is done, the following step-by-step processes are necessary.

Figure 1. Harvesting of rice plants by hand in China, 1992 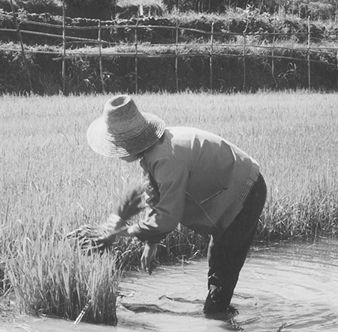 Common and specific hazards are as follows:

Working conditions should be improved and the health hazards reduced through increased mechanization. Ergonomic interventions to organize the work and working equipment, and systematic training of the body and its movements to ensure good working methods, are essential.

Necessary medical preventive methods should be strictly applied, including the introduction of first aid instruction, the provision of treatment facilities, health promotion campaigns and medical surveillance of workers.

Applicable International Labour Organization (ILO) Conventions and Recommendations should be followed. These include: