As is apparent from articles in this chapter, physical risks in forestry work are rather well documented. By contrast, comparatively little research has focused on psychological and social factors (Slappendel et al. 1993). In a forestry context such factors include: job satisfaction and security; the mental workload; susceptibility and response to stress; coping with perceived risks; work pressure, overtime and fatigue; need to endure adverse environmental conditions; social isolation in work camps with separation from families; work organization; and teamwork.

The health and safety situation in forest work depends on the wide range of factors described in this chapter: stand and terrain conditions; infrastructure; climate; technology; work methods; work organization; economic situation; contracting arrangements; worker accommodation; and education and training. These factors are known to interact and may actually compound to create higher risk or safer working environments (see “Working conditions and safety in forestry work” in this chapter).

These factors also interact with social and psychological ones, in that they influence the status of forest work, the recruitment base and the pool of skills and abilities that becomes available to the sector. In an unfavourable situation the circle of problems depicted in figure 1 can be the result. This situation is unfortunately rather common in developing countries and in segments of the forestry workforce in industrialized countries, in particular among migrant workers.

Figure 1. The circle of problems that may be encountered in forest work. 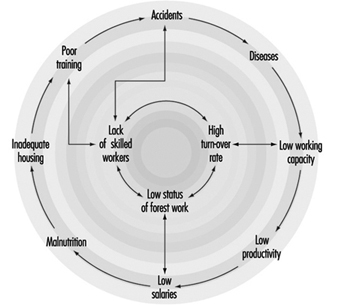 Moreover, many new entrants still come ill-prepared to the job. On-the-job training, which is often no more than trial and error, is still common. Even where training systems are well developed, the majority of workers may have no formal training. In Finland, for example, forest machine operators have been trained for almost 30 years and a total of over 2,500 graduated. Nonetheless, in the late 1980s, 90% of the contractors and 75% of the operators had received no formal training.

Social and psychological factors are likely to play a major role in determining the impact of risk and stress. Psychological factors featured prominently among the causes given by forest workers in Germany for accidents they suffered. About 11% of the accidents were attributed to stress and another third to fatigue, routine, risk taking and lack of experience. Internal cognitive models may play a significant role in the creation of risk situations leading to logging accidents, and that their study can make an important contribution to prevention.

Promising work on risk perception, assessment and risk taking in forestry has been done in Finland. The findings suggest that workers develop internal models about their jobs which lead to the development of automatic or semi-automatic routines. The theory of internal models describes the normal activity of a forest worker, like chain-saw or forest machine operation, the changes introduced through experience, the reasons for these and the creation of risk situations (Kanninen 1986). It has helped to provide a coherent explanation for many accidents and to make proposals for their prevention.

According to the theory, internal models evolve at successive levels through experience. Kanninen (1986) has suggested that in chain-saw operations the motion-control model is the lowest in the hierarchy of such models, followed by a tree handling model and a work-environment model. According to the theory, risks develop when the forest worker’s internal model deviates from the objective requirements of the situation. The model may not be sufficiently developed, it may contain inherent risk factors, it may not be used at a particular time (e.g., because of fatigue) or there may be no model that fits an unfamiliar situation—say, a windfall. When one of these situations occurs, it is likely to result in an accident.

The development and use of models is influenced by experience and training, which may explain the contradictory findings of studies on risk perception and assessment in the review by Slappendel et al. (1993). Forest workers generally consider risk-taking to be part of their job. Where this is a pronounced tendency, risk compensation can undermine efforts to improve work safety. In such situations workers will adjust their behaviour and return to what they accept as a level of risk. This may, for example, be part of the explanation for the limited effectiveness of personal protective equipment (PPE). Knowing that they are protected by cut-proof trousers and boots, workers go faster, work with the machine closer to their body and take short cuts in violation of safety regulations that they think “take too long to follow”. Typically, risk compensation seems to be partial. There are probably differences among individuals and groups in the workforce. Reward factors are probably important to trigger risk compensation. Rewards could be reduced discomfort (such as when not wearing warm protective clothing in a hot climate) or financial benefits (such as in piece-rate systems), but social recognition in a “macho” culture is also a conceivable motive. Worker selection, training and work organization should attempt to minimize incentives for risk compensation.

Stress may be defined as the psychological pressure on an individual created by a perceived mismatch between that individual’s capacity and perceived demands of the job. Common stressors in forestry include high work speed; repetitive and boring work; heat; work over- or underloads in unbalanced work crews; young or old workers trying to achieve sufficient earnings on low piece-rates; isolation from workmates, family and friends; and a lack of privacy in camps. They can also include a low general social status of forest workers, and conflicts between loggers and the local population or environmental groups. On balance, the transformation of forest work that sharply increased productivity also pushed up stress levels and reduced overall welfare in forest work (see figure 2).

Two types of workers are particularly prone to stress: harvester operators and contractors. The operator of a sophisticated harvester is in a multiple-stress situation, because of the short work cycles, the quantity of information that needs to be absorbed and the large number of fast decisions that need to be made. Harvesters are significantly more demanding than more traditional machines like skidders, loaders and forwarders. In addition to machine handling, the operator is usually also responsible for machine maintenance, planning and skid track design as well as bucking, scaling and other quality aspects that are closely monitored by the company and that have a direct impact on pay. This is particularly true in thinnings, as the operator typically works alone and makes decisions that are irreversible. In a study of thinning with harvesters, Gellerstedt (1993) analysed the mental load and concluded that the operator’s mental capacity is the limiting factor for productivity. Operators who were not able to cope with the load were unable to take enough micropauses during the work cycles and developed neck and shoulder problems as a result. Which of these complex decisions and tasks is perceived as most demanding varies considerably among individuals, depending on factors like background, previous work experience and training (Juntunen 1993, 1995).

Added strain may result from the rather common situation in which the operator is also the machine owner, working as a small contractor. This implies a high financial risk, often in the form of a loan involving up to US$1 million, in what often is a very volatile and competitive market. Working weeks often exceed 60 hours for this group. Studies of such contractors show that the ability to withstand stress is a significant factor (Lidén 1995). In one of Lidén’s studies in Sweden, as many as 54% of machine contractors were considering leaving the job—first, because it interfered too much with their family life; second, for health reasons; third, because it involved too much work; and, fourth, because it was not profitable. Researchers and contractors themselves consider resilience to stress as a precondition for a contractor to be able to stay in business without developing serious health complaints.

Where the selection process works, the group may show few mental health complaints (Kanninen 1986). In many situations, however, and not only in Scandinavia, the lack of alternatives locks contractors into this sector, where they are exposed to higher health and safety risks than individuals whose personal profile is more in line with that of the job. Good cabins and further improvement in their design, particularly of controls, and measures taken by the individual, such as regular short breaks and physical exercise, can go some way towards reducing such problems. The theory of internal models could be used to improve training to increase the operator-contractors’ readiness and ability to cope with ever more demanding machine operation. That would help lower the level of “background stress”. New forms of work organization in teams involving task variety and job rotation are probably the most difficult to put into practice, but are also the potentially most effective strategy.