Paints and coatings include paints, varnishes, lacquers, stains, printing inks and more. Traditional paints consist of a dispersion of pigment particles in a vehicle consisting of a film-former or binder (usually an oil or resin) and a thinner (usually a volatile solvent). In addition, there can be a wide variety of fillers and other additives. A varnish is a solution of oil and natural resin in an organic solvent. Synthetic resins may also be used. Lacquers are coatings in which the film dries or hardens entirely by evaporation of the solvent.

Traditional paints were under 70% solids with the remainder being mostly solvents. Air pollution regulations limiting the amount of solvents that can be emitted into the atmosphere have resulted in the development of a wide variety of substitute paints with low or no organic solvents. These include: water-based latex paints; two-part catalysed paints (e.g., epoxy and urethane systems); high solids paints (over 70% solids), including plastisol paints consisting primarily of pigments and plasticizers; radiation-cured paints; and powder coatings.

According to the US National Institute for Occupational Safety and Health (NIOSH 1984), about 60% of paint manufacturers employed fewer than 20 workers, and only about 3% had more than 250 workers. These statistics would be expected to be representative of paint manufacturers worldwide. This indicates a predominance of small shops, most of which would not have in-house health and safety expertise.

In general, the manufacture of paints and other coatings is a series of unit operations using batch processes. There are few or no chemical reactions; the operations are mostly mechanical. The manufacture involves the assembling of raw materials, mixing, dispersing, thinning and adjusting, filling of containers and warehousing.

Raw materials used to manufacture paints come as liquids, solids, powders, pastes and slurries. These are manually weighed out and premixed. Agglomerated pigment particles must be reduced to the original pigment size, and the particles must be wet with the binder to ensure dispersion in the liquid matrix. This dispersion process, called grinding, is done with a variety of types of equipment, including high-speed shaft-impeller dispersers, dough mixers, ball mills, sand mills, triple roll mills, pug mills and so forth. After an initial run, which might take as long as 48 hours, resin is added to the paste and the grinding process is repeated for a shorter period. The dispersed material is then transferred by gravity to a let-down tank where additional material such as tinting compounds can be added. For water-based paints, the binder is usually added at this stage. The paste is then thinned with resin or solvent, filtered and then transferred again by gravity to the can filling area. The filling can be done manually or mechanically.

After the dispersion process, it may be necessary to clean the tanks and mills before introducing a new batch. This can involve hand and power tools, as well as alkali cleaners and solvents.

Lacquer production usually is carried out in enclosed equipment such as tanks or mixers in order to minimize evaporation of the solvent, which would result in deposits of a dry lacquer film on processing equipment. Otherwise, lacquer production occurs in the same manner as paint production.

The manufacture of oleoresinous varnishes involves cooking the oil and resin to render them more compatible, to develop high molecular weight molecules or polymers and to increase solubility in the solvent. Older plants may use portable, open kettles for the heating. The resin and oil or resin alone are added to the kettle and then heated to about 316ºC. Natural resins must be heated prior to adding the oils. The materials are poured in over the top of the kettle. During cooking, the kettles are covered with refractory exhaust hoods. After cooking, the kettles are moved to rooms where they are cooled quickly, often by water spray, and then thinner and driers are added.

Modern plants use large closed reactors with capacities of 500 to 8,000 gallons. These reactors are similar to those used in the chemical process industry. They are fitted with agitators, sight-glasses, lines to fill and empty the reactors, condensers, temperature measuring devices, heat sources and so forth.

In both older and modern plants, the thinned resin is filtered as the final step before packaging. This is normally done while the resin is still hot, usually using a filter press.

Powder coatings are solventless systems based on the melting and fusion of resin and other additive particles onto surfaces of heated objects. The powder coatings may be either thermosetting or thermoplastic, and include such resins as epoxies, polyethylene, polyesters, polyvinyl chloride and acrylics.

The most common method of manufacture involves dry blending of the powdered ingredients and extrusion melt-mixing (see figure 1). The dry resin or binder, pigment, filler and additives are weighed and transferred to a premixer. This process is similar to dry blending operations in rubber manufacture. After mixing, the material is placed in an extruder and heated until molten. The molten material is extruded onto a cooling conveyor belt and then transferred to a coarse granulator. The granulated material is passed through a fine grinder and then sieved to achieve the desired particle size. The powder coating is then packaged.

Figure 1. Flow chart for the manufacture of powder coatings by extrusion melt-mixing method 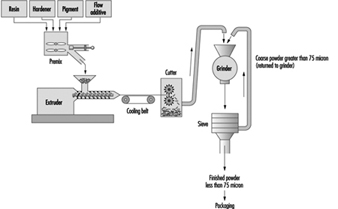 In general, the major hazards associated with the paint and coatings manufacture involve materials handling; toxic, flammable or explosive substances; and physical agents such as electrical shock, noise, heat and cold.

The manual handling of boxes, barrels, containers and so forth which contain the raw materials and finished products are major sources of injury due to improper lifting, slips, falls, dropping containers and so on. Precautions include engineering/ergonomic controls such as materials handling aids (rollers, jacks and platforms) and mechanical equipment (conveyors, hoists and fork-lift trucks), non-skid floors, personal protective equipment (PPE) such as safety shoes and proper training in manual lifting and other materials handling techniques.

Chemical hazards include exposure to toxic dusts such as lead chromate pigment, which can occur during weighing, filling of mixer and mill hoppers, operations of unenclosed equipment, filling of powdered paint containers, cleaning of equipment and from spills of containers. The manufacture of powder coatings can result in high dust exposures. Precautions include substitution of pastes or slurries for powders; local exhaust ventilation (LEV) for opening bags of powders (see figure 2) and for processing equipment, enclosure of equipment, spill cleanup procedures and respiratory protection when needed. 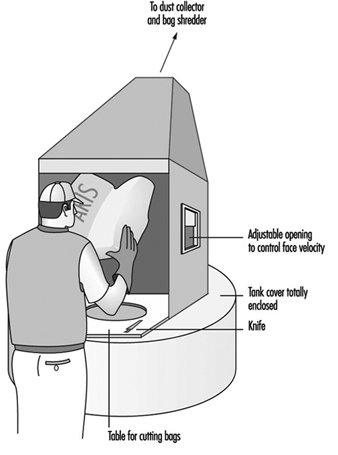 A wide variety of volatile solvents are used in paint and coating manufacture, including aliphatic and aromatic hydrocarbons, alcohols, ketones and so forth. The most volatile solvents are usually found in lacquers and varnishes. Exposure to solvent vapours can occur during thinning in solvent-based paint manufacture; while charging reaction vessels (especially older kettle types) in varnish manufacture; during can filling in all solvent-based coatings; and during manual cleaning of process equipment with solvents. Enclosure of equipment such as varnish reactors and lacquer mixers usually involves lower solvent exposures, except in the case of leaks. Precautions include enclosure of process equipment, LEV for thinning and can filling operations and respiratory protection and confined-space procedures for cleaning vessels.

Flammable solvents, combustible powders (especially nitrocellulose used in lacquer production) and oils are all fire or explosion risks if ignited by a spark or high temperatures. Sources of ignition can include faulty electrical equipment, smoking, friction, open flames, static electricity and so forth. Oil-soaked rags can be a source of spontaneous combustion. Precautions include bonding and grounding containers while transferring flammable liquids, grounding of equipment such as ball mills containing combustible dusts, ventilation to keep vapour concentrations below the lower explosive limit, covering containers when not in use, removal of sources of ignition, using spark-resistant tools of non-ferrous metals around flammable or combustible materials and good housekeeping practices.

Noise hazards can be associated with the use of ball and pebble mills, high speed dispersers, vibrating screens used for filtering and so forth. Precautions include vibration isolators and other engineering controls, replacing noisy equipment, good equipment maintenance, isolation of noise source and a hearing conservation programme where excessive noise is present.

Other hazards include inadequate machine guarding, a common source of injuries around machinery. Electrical hazards are a particular problem if there is not a proper lockout/tagout programme for equipment maintenance and repair. Burns can result from hot varnish cooking vessels and spattering materials and from hot melt glues used for packages and labels.