The diversity of processes and products within the microelectronics and semiconductor industry is immense. The focus of the occupational health and safety discussion in this chapter centres on semiconductor integrated circuit (IC) production (both in silicon-based products and valence III-V compounds), printed wiring board (PWB) production, printed circuit board (PCB) assembly and computer assembly.

The industry is composed of numerous major segments. The Electronics Industry Association uses the following delineation in reporting data on pertinent trends, sales and employment within the industry:

The emergence of the microelectronics industry has had a profound impact on the evolution and structure of the world’s economy. The pace of change within industrialized nations of the world has been greatly influenced by advances within this industry, specifically in the evolution of the integrated circuit. This pace of change is graphically represented in the timeline of the number of transistors per integrated circuit chip (see figure 1). 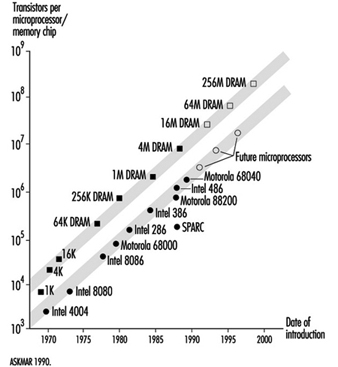 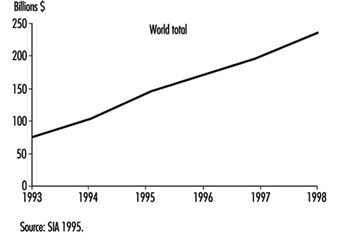 The semiconductor IC and computer/electronics assembly industries are unique compared to most other industrial categories in the relative composition of their production workforces. The semiconductor fabrication area has a high percentage of female operators that run the process equipment. The operator-related tasks typically do not require heavy lifting or excess physical strength. Also, many of the job tasks involve fine motor skills and attention to detail. Male workers predominate in the maintenance-related tasks, engineering functions and management. A similar composition is found in the computer/electronics assembly portion of this industry segment. Another unusual feature of this industry is the concentration of manufacturing in the Asia/Pacific area of the world. This is especially true in the final assembly or back-end processes in the semiconductor industry. This processing involves the positioning and placement of the fabricated integrated circuit chip (technically known as a die) on a chip carrier and lead frame. This processing requires precise positioning of the chip, typically through a microscope, and very fine motor skills. Again, female workers predominate this part of the process, with the majority of worldwide production being concentrated in the Pacific Rim, with high concentrations in Taiwan, Malaysia, Thailand, Indonesia and the Philippines, and growing numbers in China and Vietnam.

The semiconductor IC fabrication areas have various unusual properties and characteristics unique to this industry. Namely, the IC processing involves extremely tight particulate control regimens and requirements. A typical modern IC fabrication area may be rated as a Class 1 or less cleanroom. As a method of comparison, an outdoor environment would be greater than Class 500,000; a typical room in a house approximately Class 100,000; and a semiconductor back-end assembly area approximately Class 10,000. To attain this level of particulate control involves actually putting the fabrication worker in totally enclosed bunny suits that have air supply and filtration systems to control the levels of particulates generated by the workers in the fabrication area. The human occupants of the fabrication areas are considered very potent generators of fine particulates from their exhaled air, shedding of skin and hair, and from their clothing and shoes. This requirement for wearing confining clothing and isolating work routines has contributed to employees feeling like they are working in a “non-hospitable” work environment. See figure 3. Also, in the photolithographic area, the processing involves exposing the wafer to a photoactive solution, and then patterning an image on the wafer surface using ultraviolet light. To alleviate unwanted ultraviolet (UV) light from this processing area, special yellow lights are used (they lack the UV wavelength component normally found in indoor lighting). These yellow lights help to make the workers feel they are in a different work environment and can possibly have a disorienting affect on some individuals. 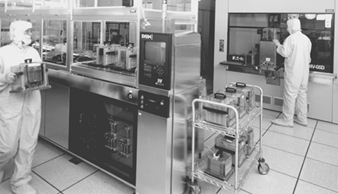