Prints are works of art made by transferring a layer of ink from an image on a printing surface (such as woodblock, screen, metal plate or stone) onto paper, fabric or plastic. The printmaking process involves several steps: (1) preparation of the image; (2) printing; and (3) cleanup. Multiple copies of the image can be made by repeating the printing step. In monoprints, only one print is made.

Intaglio printing involves incising lines by mechanical means (e.g., engraving, drypoint) or etching the metal plate with acid to create depressed areas in the plate, which form the image. Various solvent-containing resists and other materials such as rosin or spray paint (aquatinting) can be used to protect the part of the plate not being etched. In printing, the ink (which is linseed oil based) is rolled onto the plate, and the excess wiped off, leaving ink in the depressed areas and lines. The print is made by placing the paper on the plate and applying pressure by a printing press to transfer the ink image to the paper.

Relief printing involves the cutting away of the parts of woodblocks or linoleum that are not to be printed, leaving a raised image. Water-or linseed oil–based inks are applied to the raised image and the ink image transferred to paper.

Stone lithography involves making an image with a greasy drawing crayon or other drawing materials that will make the image receptive to the linseed oil–based ink, and treating the plate with acids to make non-image areas water receptive and ink repellent. The image is washed out with mineral spirits or other solvents, inked with a roller and then printed. Metal plate lithography can involve a preliminary counteretch that often contains dichromate salts. Metal plates may be treated with vinyl lacquers containing ketone solvents for long print runs.

Screen printing is a stencil process where a negative image is made on the fabric screen by blocking out portions of the screen. For water-based inks, the blockout materials must be water insoluble; for solvent-based inks, the reverse. Cut plastic stencils are frequently used and adhered to the screen with solvents. The prints are made by scraping ink across the screen, forcing the ink through the unblocked parts of the screen onto paper located underneath the screen, thus creating the positive image. Large print runs using solvent-based inks involve the release of large amounts of solvent vapours into the air.

Collagraphs are made using either intaglio or relief printing techniques on a textured surface or collage, which can be made of many materials glued onto the plate.

Photoprintmaking processes can use either presensitized plates (often diazo) for lithography or intaglio, or the photoemulsion can be applied directly to the plate or stone. A mixture of gum arabic and dichromates have often been used on stones (gum printing). The photographic image is transferred to the plate, and then the plate exposed to ultraviolet light (e.g., carbon arcs, xenon lights, sunlight). When developed, the non-exposed portions of the photoemulsion are washed away, and the plate then printed. The coating and developing agents can often contain hazardous solvents and alkalis. In photo screen processes, the screen can be coated with dichromate or diazo photoemulsion directly, or an indirect process can be used, which involves adhering sensitized transfer films to the screen after exposure.

Artists who draw, paint or make prints face significant health and safety hazards. The major sources of hazards for these artists include acids (in lithography and intaglio), alcohols (in paint, shellac, resin and varnish thinners and removers), alkalis (in paints, dye baths, photodevelopers and film cleaners), dusts (in chalks, charcoal and pastels), gases (in aerosols, etching, lithography and photoprocesses), metals (in pigments, photochemicals and emulsions), mists and sprays (in aerosols, air-brushing and aquatinting), pigments (in inks and paints), powders (in dry pigments and photochemicals, rosin, talc and whiting), preservatives (in paints, glues, hardeners and stabilizers) and solvents (such as aliphatic, aromatic and chlorinated hydrocarbons, glycol ethers and ketones). Common routes of exposure associated with these hazards include inhalation, ingestion and skin contact.

Although not well-documented, painting, drawing and printmaking may be associated with an increased risk of leukaemia, kidney tumours and bladder tumours. Suspected carcinogens to which painters, drawers and printmakers may be exposed include chromates and dichromates, polychlorinated biphenyls, trichloroethylene, tannic acid, methylene chloride, glycidol, formaldehyde, and cadmium and arsenic compounds.

The most important precautions in painting, drawing and printmaking include: substitution of water-based materials for materials based on organic solvents; proper use of general dilution ventilation and local exhaust ventilation (see figure 1); proper handling, labelling, storage and disposal of paints, flammable liquids and waste solvents; appropriate use of personal protective equipment such as aprons, gloves, goggles and respirators; and avoidance of products that contain toxic metals, especially lead, cadmium, mercury, arsenic, chromates and manganese. Solvents to be avoided include benzene, carbon tetrachloride, methyl n-butyl ketone, n-hexane and trichloroethylene. 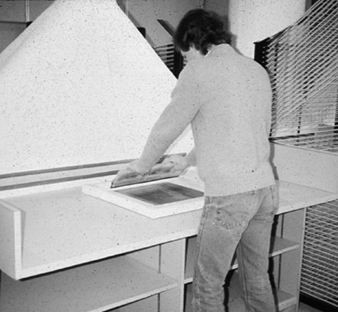 Additional efforts designed to reduce the risk of adverse health effects associated with painting, drawing and printmaking include early and continuous education of young artists concerning the hazards of art materials, and laws mandating labels on art materials that warn of both short-term and long-term health and safety hazards.