The musician relies on the skilled use of the muscles, nerves and bones (neuromusculoskeletal system). Playing an instrument requires finely controlled repetitive motions and often entails working in unnatural postures for extended periods of practice and performance (figure 1). These demands on the body can result in specific types of health problems. In addition, adverse working conditions, such as excessive sound exposure levels, prolonged periods of performance without rest, and inadequate preparation for new and difficult repertoire or instruments may affect the health of musicians in all age groups and at all levels of performing ability. Recognition of these hazards, accurate diagnosis and early treatment will prevent occupational disabilities that may interfere with, interrupt or end careers. 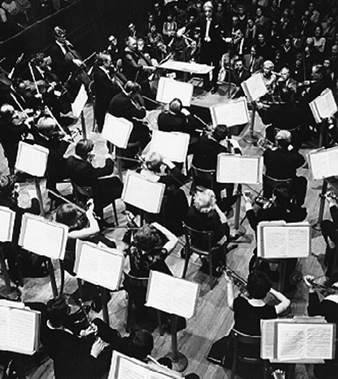 Studies from the United States, Australia and Canada suggest that around 60% of musicians will face career-threatening injuries during their working lifetime. Clinical cross-sectional studies have examined the prevalence of muscle-tendon disorders, of peripheral nerve entrapment syndromes and motor control problems. These studies have revealed several common diagnoses, which include various overuse syndromes, including strain of the muscles and connective tissue which control the bending and extending motions in the wrist and fingers. These syndromes result from the repetitive forceful movement of the muscle-tendon units. Other common diagnoses relate to pain in body parts which are involved in prolonged strain from awkward and imbalanced postures while playing musical instruments. Playing the instruments in the groups described below involves putting pressure on the branches of the nerves in the wrist and forearm, the shoulders, arm and neck. Occupational cramp or muscle spasms (focal dystonia) are also common problems which often can affect performers at the pinnacle of their careers.

Health problems in musicians who play string instruments often are caused by the manner in which the musician supports the instrument and the posture assumed while sitting or standing and playing. For example, most violinists and violists support their instruments between the left shoulder and chin. Often the musician’s left shoulder will be elevated and the left chin and jaw will bear down in order to allow the left hand to move over the fingerboard. Elevating a joint and bearing down at the same time leads to a state of static contraction which promotes neck and shoulder pain, temporomandibular joint disorders involving the nerves and muscles of the jaw, and thoracic outlet syndrome, which can include pain or numbness in the neck, shoulder and upper chest area. Prolonged static sitting postures, particularly while assuming a bent posture, promote pain in the large muscle groups which support posture. Static twisting rotation of the spine is often required to play the string bass, harp and classical guitar. Heavy electric guitars are usually supported by a strap over the left neck and shoulder, contributing to pressure on the nerves of the shoulder and upper arm (the brachial plexus) and thus to pain. These problems of posture and support contribute to the development of strain and pressure of the nerves and muscles of the wrist and fingers by promoting their faulty alignment. For example, the left wrist may be used for excessive repetitive bending motions which result in strain of the extensor muscles of the wrist and fingers and the development of carpal tunnel syndrome. Pressure on the nerves of the shoulder and arm (lower trunks of the brachial plexus) may contribute to problems with the elbow, such as a double crush syndrome and ulnar neuropathy.

Playing a keyboard instrument requires assuming a similar posture to that of typing. Often the forward and downward orientation of the head to look at the keys and hands and repetitive upward movement to look at the music causes pain in the nerves and muscles of the neck and back. The shoulders will often be rounded, combined with a forward head poking posture and a shallow breathing pattern. A condition known as thoracic outlet syndrome can develop from chronic compression of the nerves and blood vessels that pass between the muscles in the neck, shoulder and rib cage. In addition, a musician’s tendency to bend the wrists and curl the fingers while keeping the hand/finger joints flat places excessive strain on the wrist and finger muscles in the forearm. Additionally, the repeated use of the thumb kept in a position under the hand strains the thumb muscles which extend and binds the finger extensor muscles across the back of the hand. The high repetitive force needed to play large chords or octaves may strain the capsule of the wrist joint and result in ganglion formation. Prolonged co-contraction of the muscles that turn and move the arms up and down can lead to nerve entrapment syndromes. Muscle spasms and cramps (focal dystonia) are common among this group of instrumentalists, sometimes requiring long periods of neuromuscular retraining to correct movement patterns which can lead to these difficulties.

A musician who plays one of these instruments will vary his or her posture according to the need to control airflow since posture will control the area from which diaphragmatic and intercostal breath is drawn. Playing these instruments depends on the way the mouthpiece is held (the embouchure) which is controlled by the facial and pharyngeal muscles. The embouchure controls sound production of vibrating reeds or the mouthpiece. Posture also affects how the musician supports the instrument while sitting or standing and in operating the keys or valves of the instrument that govern the pitch of the note played by the fingers. For example, the traditional French open-holed flute requires sustained adduction and flexion (bending forward) of the left shoulder, sustained abduction (drawing away) of the right shoulder and rotation of the head and neck to the left in slight movement. The left wrist is often held in an extremely bent position while the hand is also extended in order to support the instrument by the curled left index finger and both thumbs, counter balanced by the right little finger. This promotes strain of the forearm muscles and the muscles which permit extension of the fingers and thumbs. The tendency to project the head and neck forward and use shallow breathing increases the chances of developing thoracic outlet syndrome.

The use of sticks, mallets and bare hands to strike various percussion instruments results in rapid pulling back of the wrists and fingers at impact. The impulse vibration caused by striking the instrument is transmitted up the hand and arm and contributes to repetitive strain injuries of the muscle-tendon units and the peripheral nerves. Biomechanical factors, such as the amount of force used, the repetitive nature of the playing and static load placed on the muscles can add to the injuries. Carpal tunnel syndrome and nodule formation in tendon sheaths are common in this group of musicians.

The risk of hearing loss from music exposure depends on the intensity and duration of exposure. It is not uncommon to have exposure levels of 100 dB during a quiet passage of orchestral music, with peak values of 126 dB measured at the shoulder of an instrumentalist in the middle of the orchestra. At the position of the conductor or teacher, levels of 110 dB in an orchestra or band are common. Exposure levels for pop/rock and jazz musicians may be significantly higher, depending on the physical acoustics of the stage or pit, amplification system and placement of speakers or other instruments. The average duration of exposure may be approximately 40 hours per week, but many professional musicians will perform 60 to 80 hours per week on occasion. Hearing loss among musicians is far more common than expected, with approximately 89% of professional musicians who were found to have suffered musculoskeletal injuries also showing an abnormal hearing test result, with a hearing loss in the 3 to 6 KHz region.

Personal ear protection can be used but it must be adapted for each instrument type (Chasin and Chong 1992). By inserting an acoustic attenuator or filter into custom-moulded earplugs, the intensity of higher frequency sounds transmitted by ordinary earplugs is reduced to a flat attenuation as measured at the eardrum, which should be less damaging to the ear. The use of a tuned or adjustable vent in a custom earplug will allow the lower frequencies and some harmonic energy to pass through the earplug unattenuated. Earplugs can be designed to provide a slight amplification to alter perception of the singer’s voice, thus allowing the artist to reduce the risk of vocal strain. Depending on the psycho-acoustical nature of the instrument and surrounding music exposures, substantial reduction in risk for the development of hearing loss can be obtained. Improvement in the perception of the relative intensity of the musician’s own performance may reduce the risk of repetitive strain injuries by a relative reduction of the force of repetitive movements.

There are practical strategies for reducing the exposure of musicians that do not interfere with music production (Chasin and Chong 1995). Loudspeaker enclosures can be elevated above floor level, which results in minimal loss of low-frequency sound energy, while preserving sufficient loudness for the musician to perform at a lower intensity level. Musicians who play high-intensity, highly directional instruments such as trumpets and trombones should be on risers so that the sound passes above the other musicians, thereby lowering its impact. There should be 2 m of unobstructed floor space in front of the orchestra. Small stringed instruments should always have at least 2 m of unobstructed space above them.