Journalism is one of the romantic professions, but it is also one of the most dangerous. Between 1990 and 1997 more than 500 journalists and media workers were killed, many the victims of gangsters, paramilitary groups and terrorists. Each year, hundreds of reporters and writers are injured, both physically and psychologically, by the horrors of war and social conflict. See figure 1.

Figure 1.  Algiers, Algeria, 11 February 1996: The devastated offices of Le Soir, one of three newspapers hit by a terrorist car bomb. 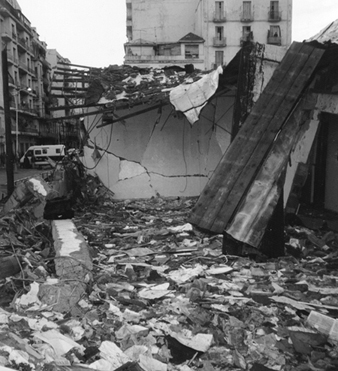 The tendency to try to manipulate or control information is becoming more evident as the speed and range of communication increases. Today information speeds around the world in seconds thanks to satellite technology. News and information can be beamed into people’s homes as it happens.

Consequently, journalists and their visible helpers—camera and technical staff, for instance—pose a threat to any group, official or otherwise, that wants to avoid public scrutiny. This leads to specific and targeted attacks on journalists and media organizations.

The problem of “censorship by violence” is exacerbated by the nature of commercial competition in the media industry and by unregulated patterns of employment. Media networks compete vigorously for market share, and this is leading to greater pressure on journalists to provide ever more dramatic and sensationalist images and reportage. Many media people are taking greater risks than before.

The situation is made worse because few media organizations provide training for their staff in how to deal with situations of violence and conflict. Such training is essential. Media staff need to be able to make coherent and sensible “risk assessment” judgements about fast-moving reporting situations. They need a basic knowledge of first aid and advice from media veterans on how to report from dangerous scenes.

The most vulnerable group of media workers—freelance journalists and casual staff—are the ones least likely to receive training even where it is available. More freelance staff are employed than ever before and many of them are hired from the regions where the reported action is taking place. Sometimes they are hired without any life or health insurance. If they get hurt, they are not entitled to compensation.

Because they often work in very unpredictable circumstances, some journalists will always be at risk. Often it will be impossible to avoid injury, even death. But much more can be done to minimize the levels of risk. For instance, in Algeria, where some 60 journalists were assassinated between June 1994 and March 1996, journalists’ unions, employers and the authorities have combined their efforts to minimize risks.

Much more needs to be done by media organizations and representatives of media workers and journalists to provide protections for media personnel. In particular there is a need for:

In addition, media organizations must reverse recent trends that undermine the social and professional conditions in which journalists work. There should be increased investment in professional training and journalistic ethics to emphasize the importance of investigative journalism to the good health of democratic society.

Journalists themselves have a key role to play. All journalists must take responsibility to exercise the highest standards of personal safety and minimize risks to themselves and their colleagues. Journalists need to maintain the highest professional standards and conduct and should not compromise the ethics of journalism in any aspect of the gathering, production or dissemination of news and information.

But it is not only the professionals that need to take practical steps to address the issue. Governments, which have a responsibility to protect the lives and security of citizens, must ensure that journalists and media organizations are provided with the maximum security and protection from violence.

Government and public authorities must not regard journalists as part of the state security apparatus and must not demand information or materials from media organizations in order to assist inquiries which are the responsibility of official agencies.

One of the worrying features of journalism has always been that governments are prepared to use the cover of journalistic activity in order to carry out surveillance and espionage. It is a practice which exposes all travelling journalists to suspicion and intimidation.

The key is to reduce the risk. There are no absolute guarantees of safety, but governments, journalists and media organizations need to avoid creating the conditions which make it easier to commit violence against media. A starting point would be recognition that no single story, no matter how dramatic, is worth a life.