The informal sector accounts for between 20 and 70% of the urban workforce in developing countries (with the average being 40%); and the traders and hawkers of outdoor markets comprise a significant portion of this sector. Such work is by its very nature precarious. It involves long hours and low pay. Average earnings may not total 40% of levels found in the formal sector. Not only do many workers in outdoor markets lack permanent locations to conduct their business, they also may be compelled to do without supporting infrastructural facilities. They do not enjoy the same legal protection or social insurance as workers in the formal sector and are subject to harassment. Occupationally related morbidity and mortality rates generally go unrecorded (Bequele 1985). 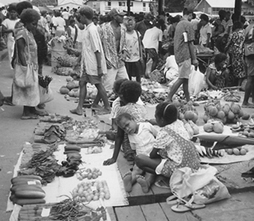 Workers in outdoor markets in both developing and developed countries, such as those shown in figure 1  and figure 2 , are exposed to numerous health and safety hazards. They are exposed to exhaust from motor vehicles, which contains such things as carbon monoxide and polycyclic aromatic hydrocarbons. Workers are also exposed to the weather. In tropical and desert locations they are subject to heat stress and dehydration. In cooler climates they are exposed to freezing temperatures, which can cause problems such as numbness, shivering and frostbite. Workers in outdoor markets may not have access to adequate hygiene facilities.

Figure 2. Heavy baskets of sea urchins being distributed by a small operator-owner, Japan, 1989 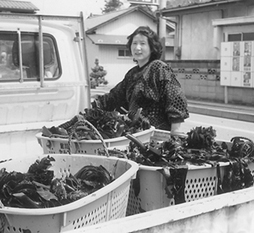 The informal sector generally and outdoor markets specifically involve child labour. Roughly 250 million children are engaged in full- and part-time work around the world (ILO 1996); street traders are the most visible child workers. Children who work, including street traders, typically are denied education and often are forced to perform tasks, such as lifting heavy loads, which can result in permanent disabilities.