Without treatment of waste the current concentration of people and industry in many parts of the world would very quickly make portions of the environment incompatible with life. Although reduction of the amount of waste is important, the proper treatment of waste is essential. Two basic types of waste enter a treatment plant, human/animal waste and industrial waste. Humans excrete about 250 grams of solid waste per capita per day, including 2000 million coliform and 450 million streptococci bacteria per person per day (Mara 1974). Industrial solid waste production rates range from 0.12 tons per employee per year at professional and scientific institutions to 162.0 tons per employee per year at sawmills and planing mills (Salvato 1992). Although some waste treatment plants are exclusively dedicated to handling one or the other type of material, most plants handle both animal and industrial waste.

The goal of waste water treatment plants is to remove as much of the solid, liquid and gaseous contaminants as possible within technically feasible and financially achievable constraints. There are a variety of different processes that are used to remove contaminants from waste water including sedimentation, coagulation, flocculation, aeration, disinfection, filtration and sludge treatment. (See also the article “Sewage treatment” in this chapter.) The specific hazard associated with each process varies depending on the design of the treatment plant and the chemicals used in the different processes, but the types of hazard can be classified as physical, microbial and chemical. The key to preventing and/or minimizing the adverse effects associated with working in sewage treatment plants is to anticipate, recognize, evaluate and control the hazards. 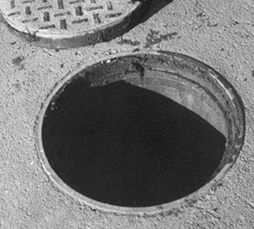 Physical hazards include confined spaces, inadvertent energizing of machines or machine parts and trips and falls. The result of an encounter with a physical hazards can often be immediate, irreversible and serious, even fatal. Physical hazards vary with the design of the plant. Most sewage treatment plants, however, have confined spaces which include underground or below grade vaults with limited access, manholes (figure 1) and the sedimentation tanks when they have been emptied of liquid content during, for example, repairs (figure 2). Mixing equipment, sludge rakes, pumps and mechanical devices used for a variety of operations in sewage treatment plants can maim, and even kill, if they are inadvertently activated when a worker is servicing them. Wet surfaces, often encountered in sewage treatment plants, contribute to slipping and falling hazards. 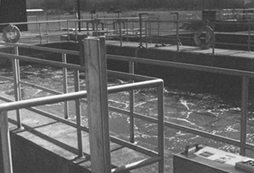 Confined-space entry is one of the most common and one of the most serious hazards faced by sewage treatment workers. A universal definition of a confined space is elusive. In general, however, a confined space is an area with limited means of entry and egress that was not designed for continuous human habitation and that does not have adequate ventilation. Hazards occur when the confined space is associated with a deficiency of oxygen, the presence of a toxic chemical or an engulfing material, such as water. Decreased oxygen levels can be the result of a variety of conditions including the replacement of oxygen with another gas, such as methane or hydrogen sulphide, the consumption of oxygen by the decay of organic material contained in the waste water or the scavenging of oxygen molecules in the rusting process of some structure within the confined space. Because low levels of oxygen in confined spaces cannot be detected by unaided human observation it is extremely important to use an instrument that can determine the level of oxygen before entering any confined space.

The earth’s atmosphere consists of 21% oxygen at sea level. When the percentage of oxygen in breathing air falls below about 16.5% a person’s breathing becomes more rapid and more shallow, the heart rate increases and the person begins to lose coordination. Below about 11% the person experiences nausea, vomiting, inability to move and unconsciousness. Emotional instability and impaired judgement may occur at oxygen levels somewhere between these two points. When individuals enter an atmosphere with oxygen levels below 16.5% they may immediately become too disoriented to get themselves out and eventually succumb to unconsciousness. If the oxygen depletion is great enough individuals can become unconscious after one breath. Without rescue they can die within minutes. Even if rescued and resuscitated, permanent damage can occur (Wilkenfeld et al. 1992). 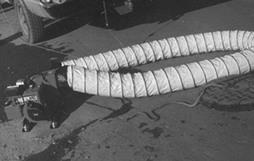 Sewage treatment plants often have large pieces of machinery to move sludge or raw sewage from one place in the plant to another. When repairs are made on this type of equipment the entire machine should be de-energized. Furthermore, the switch to re-energize the equipment should be under the control of the person performing the repairs. This prevents another worker in the plant from inadvertently energizing the equipment. Development and implementation of procedures to achieve these goals is called a lockout/tagout programme. Mutilation of body parts, such as fingers, arms and legs, dismemberment and even death can result from ineffective or inadequate lockout/tagout programmes.

Sewage treatment plants often contain large tanks and storage containers. People sometimes need to work on top of the containers, or walk by pits that have been emptied of water and may contain an 8 to 10 foot (2.5 to 3 m) drop (see figure 4). Sufficient protection against falls as well as adequate safety training should be provided for the workers.

The three main categories of microbes relevant to this discussion are fungi, bacteria and viruses. All three of these can cause acute illness as well as chronic disease. Acute symptoms including respiratory distress, abdominal pains and diarrhoea have been reported in waste treatment workers (Crook, Bardos and Lacey 1988; Lundholm and Rylander 1980). Chronic diseases, such as asthma and allergic alveolitis, have been traditionally associated with exposure to high levels of airborne microbes and, recently, with microbial exposure during the treatment of domestic waste (Rosas et al. 1996; Johanning, Olmstead and Yang 1995). Reports of significantly elevated concentrations of fungi and bacteria in waste treatment, sludge dewatering and composting facilities are beginning to be published (Rosas et al. 1996; Bisesi and Kudlinski 1996; Johanning Olmstead and Yang 1995). Another source of airborne microbes is the aeration tanks which are used in many sewage treatment plants.

In addition to inhalation, microbes can be transmitted through ingestion and through contact with skin that is not intact. Personal hygiene, including washing hands before eating, smoking and going to the bathroom, is important. Food, drink, eating utensils, cigarettes and anything that would be put into the mouth should be kept away from areas of possible microbial contamination.

Chemical encounters at waste treatment plants can be both immediate and fatal, as well as protracted. A variety of chemicals are used in the process of coagulation, flocculation, disinfection and sludge treatment. The chemical of choice is determined by the contaminant or contaminants in the raw sewage; some industrial waste requires somewhat exotic chemical treatment. In general, however, the primary hazards from chemicals used in the coagulation and flocculation processes are skin irritation and eye injury due to direct contact. This is especially true of solutions which have a pH (acidity) less than 3 or greater than 9. The disinfection of effluent is often achieved by using either liquid or gaseous chlorine. Use of liquid chlorine can cause eye injury if splashed into the eyes. Ozone and ultraviolet light are also used to achieve disinfection of the effluent.

One way to monitor the effectiveness of sewage treatment is to measure the amount of organic material which remains in the effluent after treatment is complete. This can be done by determining the amount of oxygen that would be required to biodegrade the organic material contained in 1 litre of liquid over a period of 5 days. This is referred to as the 5-day biological oxygen demand (BOD5).

Chemical hazards in sewage treatment plants arise from the decomposition of organic material which results in the production of hydrogen sulphide and methane, from toxic waste dumped down the sewer lines and from the contaminants produced by operations performed by the workers themselves.

Methane is another gas produced by the decomposition of organic matter. In addition to displacing oxygen, methane is explosive. Levels can be reached which result in an explosion when a spark or source of ignition is introduced.

Plants that handle industrial waste should have a thorough knowledge of the chemicals used in each of the industrial plants that utilize their services and a working relationship with the management of those plants so that they are promptly informed of any changes in processes and waste contents. Dumping of solvents, fuels and any other substance into sewer systems presents a hazard to treatment workers not only because of the toxicity of the material dumped but also because the dumping is unanticipated.

Whenever any industrial operation, such as welding or spray painting, is performed in a confined space special care must be taken to provide sufficient ventilation to prevent an explosion hazard as well as to remove toxic material produced by the operation. When an operation performed in a confined space produces a toxic atmosphere it is often necessary to equip the worker with a respirator because ventilation of the confined space may not ensure that the concentration of the toxic chemical can be maintained below the permissible exposure limit. Selection and fitting of a proper respirator falls within the purview of industrial hygiene practice.

Another serious chemical hazard in sewage treatment plants is the use of gaseous chlorine to decontaminate the effluent from the plant. The gaseous chlorine comes in a variety of containers weighing from 70 kg to roughly 1 tonne. Some of the very large sewage treatment plants use chlorine delivered in railroad cars. Gaseous chlorine is extremely irritating to the alveolar portion of the lungs, even in levels as low as a few ppm. Inhalation of higher concentrations of chlorine can cause inflammation of the alveoli of the lung and produce the adult respiratory distress syndrome, which has a 50% death rate. When a sewage treatment plant utilizes large amounts of chlorine (1 tonne and greater) the hazard exists not only for the plant workers but for the surrounding community as well. Unfortunately, the plants that use the largest amounts of chlorine are often located in large metropolitan centres with high density of people. Other methods of decontamination of sewage treatment plant effluent are available, including ozone treatment, the use of liquid hypochlorite solution and ultraviolet irradiation.