The occupational safety and health of workers has been an important aspect of legislation laid down in the form of the Labour Law promulgated in July 1994. To urge enterprises into the market system, and in the meantime to protect the rights of labourers, in-depth reforms in the system of labour contracts and wage distribution and in social security have been major priorities in the government agenda. Establishing a uniform welfare umbrella for all workers regardless of the ownership of the enterprises is one of the goals, which also include unemployment coverage, retirement pension systems, and occupational disease and injuries compensation insurance. The Labour Law requires that all employers pay a social security contribution for their workers. Part of the legislation, the draft of the Occupational Disease Prevention and Control Law, will be an area of the Labour Law to which major attention has been devoted in order to regulate the behaviour and define the responsibilities of employers in controlling occupational hazards, while at the same time giving more rights to workers in protecting their own health.

The Ministry of Public Health (MOPH), the Ministry of Labour (MOL), and the All-China Federation of Trade Unions (ACFTU) have a long history of cooperation. Many important policies and activities have resulted from their joint efforts.

The current division of responsibility between the MOPH and the MOL in occupational safety and health is as follows:

Figure 1. Governmental organization and division of responsibility for occupational health and safety 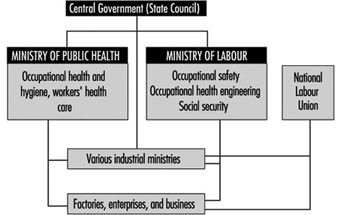 It is difficult to draw a line between the responsibilities of the MOPH and the MOL. It is expected that further cooperation will focus on enhancing enforcement of occupational safety and health regulations.

The ACFTU has been increasingly involved in safeguarding workers’ rights. One of the important tasks of the ACFTU is to promote the establishment of trade unions in foreign-funded enterprises. Only 12% of overseas-funded enterprises have established unions.

More in this category: « Occupational Health and Safety: The European Union Case Study: Exposure Standards in Russia »
back to top