As the primary importance of any fire protection measure is to provide an acceptable degree of life safety to inhabitants of a structure, in most countries legal requirements applying to fire protection are based on life safety concerns. Property protection features are intended to limit physical damage. In many cases these objectives are complementary. Where concern exists with the loss of property, its function or contents, an owner may choose to implement measures beyond the required minimum necessary to address life safety concerns.

A fire detection and alarm system provides a means to detect fire automatically and to warn building occupants of the threat of fire. It is the audible or visual alarm provided by a fire detection system that is the signal to begin the evacuation of the occupants from the premises. This is especially important in large or multi-storey buildings where occupants would be unaware that a fire was underway within the structure and where it would be unlikely or impractical for warning to be provided by another inhabitant.

Basic elements of a fire detection and alarm system

A fire detection and alarm system may include all or some of the following:

To reduce the threat of smoke from entering exit paths during evacuation from a structure, smoke control systems can be used. Generally, mechanical ventilation systems are employed to supply fresh air to the exit path. This method is most often used to pressurize stairways or atrium buildings. This is a feature intended to enhance life safety.

Portable fire extinguishers and water hose reels are often provided for use by building occupants to fight small fires (see figure 1). Building occupants should not be encouraged to use a portable fire extinguisher or hose reel unless they have been trained in their use. In all cases, operators should be very cautious to avoid placing themselves in a position where safe egress is blocked. For any fire, no matter how small, the first action should always be to notify other building occupants of the threat of fire and summon assistance from the professional fire service. 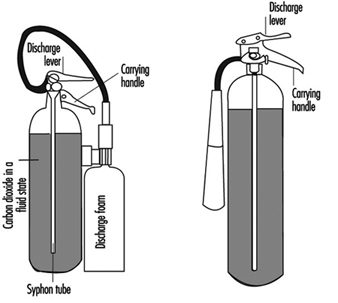 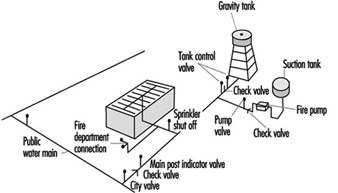 A common misconception is that all automatic sprinkler heads open in the event of a fire. In fact, each sprinkler head is designed to open only when sufficient heat is present to indicate a fire. Water then flows only from the sprinkler head(s) that have opened as the result of fire in their immediate vicinity. This design feature provides efficient use of water for fire-fighting and limits water damage.

Water for an automatic sprinkler system must be available in sufficient quantity and at sufficient volume and pressure at all times to ensure reliable operation in the event of fire. Where a municipal water supply cannot meet this requirement, a reservoir or pump arrangement must be provided to provide a secure water supply.

Control valves should be maintained in the open position at all times. Often, supervision of the control valves can be accomplished by the automatic fire alarm system by provision of valve tamper switches that will initiate a trouble or supervisory signal at the fire alarm control panel to indicate a closed valve. If this type of monitoring cannot be provided, the valves should be locked in the open position.

Water flows through a piping network, ordinarily suspended from the ceiling, with the sprinkler heads suspended at intervals along the pipes. Piping used in sprinkler systems should be of a type that can withstand a working pressure of not less than 1,200 kPa. For exposed piping systems, fittings should be of the screwed, flanged, mechanical joint or brazed type.

A sprinkler head consists of an orifice, normally held closed by a temperature-sensitive releasing element, and a spray deflector. The water discharge pattern and spacing requirements for individual sprinkler heads are used by sprinkler designers to ensure complete coverage of the protected risk.

Water spray systems increase the effectiveness of water by producing smaller water droplets, and thus a greater surface area of water is exposed to the fire, with a relative increase in heat absorption capability. This type of system is often chosen as a means of keeping large pressure vessels, such as butane spheres, cool when there is a risk of an exposure fire originating in an adjacent area. The system is similar to a sprinkler system; however, all heads are open, and a separate detection system or manual action is used to open control valves. This allows water to flow through the piping network to all spray devices that serve as outlets from the piping system.

In a foam system, a liquid concentrate is injected into the water supply before the control valve. Foam concentrate and air are mixed, either through the mechanical action of discharge or by aspirating air into the discharge device. The air entrained in the foam solution creates an expanded foam. As expanded foam is less dense than most hydrocarbons, the expanded foam forms a blanket on top of the flammable liquid. This foam blanket reduces fuel vapour propagation. Water, which represents as much as 97% of the foam solution, provides a cooling effect to further reduce vapour propagation and to cool hot objects that could serve as a source of re-ignition.

Carbon dioxide systems consist of a supply of carbon dioxide, stored as liquified compressed gas in pressure vessels (see figures 3 and 4). The carbon dioxide is held in the pressure vessel by means of an automatic valve that is opened upon fire by means of a separate detection system or by manual operation. Once released, the carbon dioxide is delivered to the fire by means of a piping and discharge nozzle arrangement. Carbon dioxide extinguishes fire by displacing the oxygen available to the fire. Carbon dioxide systems can be designed for use in open areas such as printing presses or enclosed volumes such as ship machinery spaces. Carbon dioxide, at fire-extinguishing concentrations, is toxic to people, and special measures must be employed to ensure that persons in the protected area are evacuated before discharge occurs. Pre-discharge alarms and other safety measures must be carefully incorporated into the design of the system to ensure adequate safety for people working in the protected area. Carbon dioxide is considered to be a clean extinguishant because it does not cause collateral damage and is electrically non-conductive. 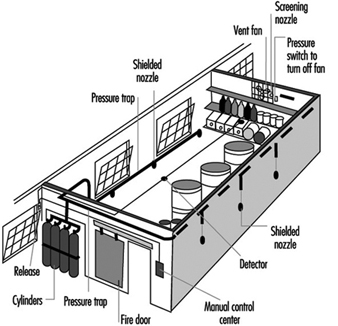 Figure 4. A total flooding system installed in a room with a raised floor. 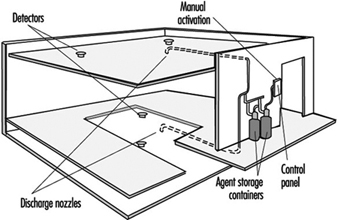 Inert gas systems generally use a mixture of nitrogen and argon as an extinguishing medium. In some cases, a small percentage of carbon dioxide is also provided in the gas mixture. The inert gas mixtures extinguish fires by reducing oxygen concentration within a protected volume. They are suitable for use in enclosed spaces only. The unique feature offered by inert gas mixtures is that they reduce the oxygen to a low enough concentration to extinguish many types of fires; however, oxygen levels are not sufficiently lowered to pose an immediate threat to occupants of the protected space. The inert gases are compressed and stored in pressure vessels. System operation is similar to a carbon dioxide system. As the inert gases cannot be liquefied by compression, the number of storage vessels required for protection of a given enclosed protected volume is greater than that for carbon dioxide.

Halons 1301, 1211 and 2402 have been identified as ozone-depleting substances. Production of these extinguishing agents ceased in 1994, as required by the Montreal Protocol, an international agreement to protect the earth’s ozone layer. Halon 1301 was most often used in fixed fire protection systems. Halon 1301 was stored as liquefied, compressed gas in pressure vessels in a similar arrangement to that used for carbon dioxide. The advantage offered by halon 1301 was that storage pressures were lower and that very low concentrations provided effective extinguishing capability. Halon 1301 systems were used successfully for totally enclosed hazards where the extinguishing concentration achieved could be maintained for a sufficient time for extinguishment to occur. For most risks, concentrations used did not pose an immediate threat to occupants. Halon 1301 is still used for several important applications where acceptable alternatives have yet to be developed. Examples include use on-board commercial and military aircraft and for some special cases where inerting concentrations are required to prevent explosions in areas where occupants could be present. The halon in existing halon systems that are no longer required should be made available for use by others with critical applications. This will militate against the need to produce more of these environmentally sensitive extinguishers and help protect the ozone layer.

Halocarbon agents were developed as the result of the environmental concerns associated with halons. These agents differ widely in toxicity, environmental impact, storage weight and volume requirements, cost and availability of approved system hardware. They all can be stored as liquefied compressed gases in pressure vessels. System configuration is similar to a carbon dioxide system.

Only those skilled in this work are competent to design, install and maintain this equipment. It may be necessary for many of those charged with purchasing, installing, inspecting, testing, approving and maintaining this equipment to consult with an experienced and competent fire protection specialist to discharge their duties effectively.

This section of the Encyclopaedia presents a very brief and limited overview of the available choice of active fire protection systems. Readers may often obtain more information by contacting a national fire protection association, their insurer or the fire prevention department of their local fire service.

American Welding Society (AWS). 1988. Recommended Safe Practices for the Preparation for Welding and Cutting of Containers that have held Hazardous Substances. Miami: AWS.

British Standards Institute (BSI). 1992. The Protection of Structures Against Lightning.

European Commission Directive (ECD). 1992. The Management of Health and Safety at Work Regulations.

—. 1990a. Standard System for the Identification of the Fire Hazards of Materials. NFPA No. 704. Quincy, Mass.: NFPA.

—. 1995b. Standard for the Installation of Lighting Protection Systems. NFPA No.780. Quincy, Mass.: NFPA.