Right to Know: The Role of Community-Based Organizations

In the context of occupational health and safety, “right to know” refers generally to laws, rules and regulations requiring that workers be informed about health hazards related to their employment. Under right-to-know mandates, workers who handle a potentially harmful chemical substance in the course of their job duties cannot be left unaware of the risk. Their employer is legally obligated to tell them exactly what the substance is chemically, and what kind of health damage it can cause. In some cases, the warning must also include advice on how to avoid exposure and must state the recommended treatment in case exposure does occur. This policy contrasts sharply with the situation it was meant to replace, unfortunately still prevailing in many workplaces, in which workers knew the chemicals they used only by trade names or generic names such as “Cleaner Number Nine” and had no way to judge whether their health was being endangered.

Under right-to-know mandates, hazard information is usually conveyed through warning labels on workplace containers and equipment, supplemented by worker health and safety training. In the United States, the major vehicle for worker right to know is the Occupational Safety and Health Administration’s Hazard Communication Standard, finalized in 1986. This federal regulatory standard requires labelling of hazardous chemicals in all private-sector workplaces. Employers must also provide workers access to a detailed Materials Safety Data Sheet (MSDS) on each labelled chemical, and provide worker training in safe chemical handling. Figure 1 shows a typical US right-to-know warning label. 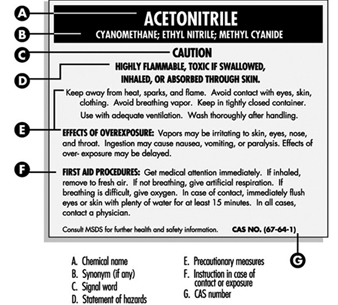 It should be noted that as a policy direction, the provision of hazard information differs greatly from direct regulatory control of the hazard itself. The labelling strategy reflects a philosophical commitment to individual responsibility, informed choice and free market forces. Once armed with knowledge, workers are in theory supposed to act in their own best interests, demanding safe working conditions or finding different work if necessary. Direct regulatory control of occupational hazards, by contrast, assumes a need for more active state interventions to counter the power imbalances in society that prevent some workers from making meaningful use of hazard information on their own. Because labelling implies that the informed workers bear ultimate responsibility for their own occupational safety, right-to-know policies occupy a somewhat ambiguous status politically. On the one hand, they are cheered by labour advocates as a victory enabling workers to protect themselves more effectively. On the other hand, they can threaten workers’ interests if right to know is allowed to replace or weaken other occupational safety and health regulations. As activists are quick to point out, the “right to know” is a starting point that needs to be complemented with the “right to understand” and the “right to act”, as well as with continued effort to control work hazards directly.

Local organizations play a number of important roles in shaping the real-world significance of worker right-to-know laws and regulations. First and foremost, these rights often owe their very existence to public interest groups, many of them community based. For example, “COSH groups” (grass-roots Committees on Occupational Safety and Health) were central participants in the lengthy rule-making and litigation that went into establishing the Hazard Communication Standard in the United States. See box for a more detailed description of COSH groups and their activities.

Organizations in the local community also play a second critical role: assisting workers to make more effective use of their legal rights to hazard information. For example, COSH groups advise and assist workers who feel they may suffer retaliation for seeking hazard information; raise consciousness about reading and observing warning labels; and help bring to light employer violations of right-to-know requirements. This help is particularly important to workers who feel intimidated in using their rights due to low education levels, low job security, or lack of a supportive trade union. COSH groups also assist workers in interpreting the information contained on labels and in Material Safety Data Sheets. This kind of support is badly needed for workers with limited literacy. It can also help workers with good reading skills but insufficient technical background to understand the MSDSs, which are often written in scientific language confusing to an untrained reader.

Worker right to know is not only a matter of transmitting factual information; it also has an emotional side. Through right to know, workers may learn for the first time that their jobs are dangerous in ways they had not realized. This disclosure can stir up feelings of betrayal, outrage, dread and helplessness—sometimes with great intensity. Accordingly, a third important role that some community-based organizations play in worker right to know is to provide emotional support for workers struggling to deal with the personal implications of hazard information. Through self-help support groups, workers receive validation, a chance to express their feelings, a sense of collective support, and practical advice. In addition to COSH groups, examples of this kind of self-help organization in the United States include Injured Workers, a national network of support groups that provides a newsletter and locally available support meetings for individuals contemplating or involved in workers’ compensation claims; the National Center for Environmental Health Strategies, an advocacy organization located in New Jersey, serving those at risk of or suffering from multiple chemical sensitivity; and Asbestos Victims of America, a national network centred in San Francisco that offers information, counselling, and advocacy for workers exposed to asbestos.

NIOSH’s experience with this kind of information provision is instructive. In its pilot programmes, NIOSH undertook to develop accurate lists of workers with probable exposure to hazardous chemicals in a particular plant; to send personal letters to all workers on the list, informing them of the possibility of health risk; and, where indicated and feasible, to provide or encourage medical screening. It immediately became obvious, however, that the notification did not remain a private matter between the agency and each individual worker. On the contrary, at every step the agency found its work affected by community-based organizations and local institutions.

NIOSH’s most controversial notification took place in the early 1980s in Augusta, Georgia, with 1,385 chemical workers who had been exposed to a potent carcinogen (β-naphthylamine). The workers involved, predominantly African-American males, were unrepresented by a union and lacked resources and formal education. The community’s social climate was, in the words of programme staff, “highly polarized by racial discrimination, poverty, and substantial lack of understanding of toxic hazards”. NIOSH helped establish a local advisory group to encourage community involvement, which quickly took on a life of its own as more militant grass-roots organizations and individual worker advocates joined the effort. Some of the workers sued the company, adding to the controversies already surrounding the programme. Local organizations such as the Chamber of Commerce and the county Medical Society also became involved. Even many years later, echoes can still be heard of the conflicts among local organizations involved in the notification. In the end, the programme did succeed in informing the exposed workers of their life-long risk for bladder cancer, a highly treatable disease if caught early. Over 500 of them were medically screened through the programme, and a number of possibly life-saving medical interventions resulted.

A striking feature of the Augusta notification is the central role played by the news media. Local news coverage of the programme was extremely heavy, including over 50 newspaper articles and a documentary film about the chemical exposures (“Lethal Labour”) shown on local TV. This publicity reached a wide audience and had enormous impact on the notified workers and the community as a whole, leading the NIOSH project director to observe that “in actuality, the news media perform the real notification”. In some situations, it may be useful to regard local journalists as an intrinsic part of right to know and plan a formal role for them in the notification process to encourage more accurate and constructive reporting.

While the examples here are drawn from the United States, the same issues arise worldwide. Worker access to hazard information represents a step forward in basic human rights, and has properly become a focal point of political and service effort for pro-worker community-based organizations in many countries. In nations with weak legal protections for workers and/or weak labour movements, community-based organizations are all the more important in terms of the three roles discussed here—advocating for stronger right-to-know (and right-to-act) laws; assisting workers to use right-to-know information effectively; and providing social and emotional support for those who learn they are at risk from work hazards.

More in this category: « Community-Based Organizations The COSH Movement and Right to Know »
back to top