The term plantation is widely used to describe large-scale units where industrial methods are applied to certain agricultural enterprises. These enterprises are found primarily in the tropical regions of Asia, Africa and Central and South America, but they are also found in certain subtropical areas where the climate and soil are suitable for the growth of tropical fruits and vegetation.

While the cultivation of the various plantation crops requires widely different geographic, geological and climatic conditions, practically all of them thrive best in areas where climatic and environmental conditions are arduous. In addition, the extensive nature of plantation undertakings, and in most cases their isolation, has given rise to new settlements that differ considerably from indigenous settlements (NRC 1993).

The main activity on a plantation is the cultivation of one of two kinds of crops. This involves the following kinds of work: soil preparation, planting, cultivation, weeding, crop treatment, harvesting, transportation and storage of produce. These operations entail the use of a variety of tools, machines and agricultural chemicals. Where virgin land is to be cultivated, it may be necessary to clear forest land by felling trees, uprooting stumps and burning off undergrowth, followed by ditch and irrigation channel digging. In addition to the basic cultivation work, other activities may also be carried out on a plantation: raising livestock, processing crops and maintaining and repairing buildings, plants, machinery, implements, roads and railway tracks. It may be necessary to generate electricity, dig wells, maintain irrigation trenches, operate engineering or woodworking shops and transport products to the market.

Child labour is employed on plantations around the world. Children work with their parents as part of a team for task-based compensation, or they are employed directly for special plantation jobs. They typically experience long and arduous working hours, little safety and health protection and inadequate diet, rest and education. Rather than direct employment, many children are recruited as labour through contractors, which is common for occasional and seasonal tasks. Employing labour through contracted intermediaries is a long-standing practice on plantations. The plantation management thus does not have an employer- employee relationship with the plantation workers. Rather, they contract with the intermediary to supply the labour. Generally, conditions of work for contract labour are inferior to those of directly employed workers.

Many plantation workers are paid based upon the tasks performed rather than the hours worked. For example, these tasks may include lines of sugar cane cut and loaded, number of rubber trees tapped, rows weeded, bushels of sisal cut, kilograms of tea plucked or hectares of fertilizer applied. Conditions such as climate and terrain may affect the time to complete these tasks, and whole families may work from dawn to dusk without taking a break. The majority of countries where plantation commodities are grown report that plantation employees work more than 40 hours per week. Moreover, most plantation workers move to their work location on foot, and since plantations are large, much time and effort are expended on travel to and from the job. This travel can take hours each way (ILO 1994).

Work on plantations involves numerous hazards relating to the work environment, the tools and equipment used and the very nature of the work. One of the first steps toward improving safety and health on plantations is to appoint a safety officer and form a joint safety and health committee. Safety officers should assure that buildings and equipment are kept safe and that work is performed safely. Safety committees bring management and labour together in a common undertaking and enable the workers to participate directly in improving safety. Safety committee functions include developing work rules for safety, participating in injury and disease investigations and identifying locations that place workers and their families in danger.

Medical services and first aid materials with adequate instruction should be provided. Medical doctors should be trained in the recognition of occupational diseases related to plantation work including pesticide poisoning and heat stress. A risk survey should be implemented on the plantation. The purpose of the survey is to comprehend risk circumstances so that preventive action can be taken. The safety and health committee can be engaged in the survey along with experts including the safety officer, the medical supervisor and inspectors. Table 1  shows the steps involved in a survey. The survey should result in action including the control of potential hazards as well as hazards that have resulted in an injury or disease (Partanen 1996). A description of some potential hazards and their control follow.

The long hours and demanding work make fatigue a major concern. Fatigued workers may be unable to make safe judgements; this may lead to incidents that can result in injuries or other inadvertent exposures. Rest periods and shorter workdays can reduce fatigue.

Poorly designed tools will often result in poor work posture, and poorly sharpened tools will require greater physical effort to complete tasks. Working in a bent or stooping position and lifting heavy loads imposes strain on the back. Working with arms above the shoulder can cause upper-extremity musculoskeletal disorders (figure 1). Proper tools should be selected to eliminate poor posture, and they should be well maintained. Heavy lifting can be reduced by lessening the weight of the load or engaging more workers to lift the load. 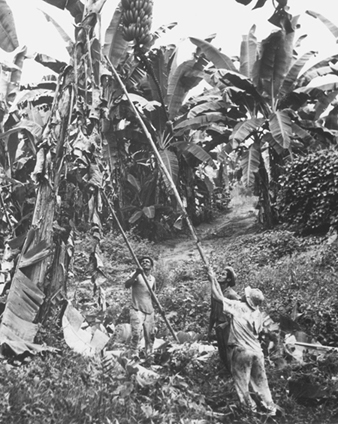 Injuries can result from improper uses of hand tools such as machetes, scythes, axes and other sharp-edged or pointed tools, or portable power tools such as chain-saws; poor positioning and disrepair of ladders; or unsuitable replacements for broken ropes and chains. Workers should be trained in the proper use and maintenance of equipment and tools. Appropriate replacements should be provided for broken or damaged tools and equipment.

Unguarded machinery can entangle clothing or hair and can crush workers and result in serious injury or death. All machines should have safety built in, and the possibility of dangerous contact with moving parts should be eliminated. A lockout/tagout programme should be in effect for all maintenance and repair.

Machinery and equipment are also sources of excessive noise, resulting in hearing loss among plantation workers. Hearing protection should be used with machinery with high levels of noise. Low noise levels should be a factor in selecting equipment.

Plantation roadways and paths may be narrow, thus presenting the hazard of head-on crashes between vehicles or overturns off the side of the road. Safe boarding of transport vehicles including trucks, tractor- or animal-drawn trailers and railways should be ensured. Where two-way roads are used, wider passages should be provided at suitable intervals to allow vehicles to pass. Adequate railing should be provided on bridges and along precipices and ravines.

Tractors and other vehicles pose two principal dangers to workers. One is tractor overturns, which commonly result in the fatal crushing of the operator. Employers should ensure that rollover protective structures are mounted on tractors. Seat-belts should also be worn during tractor operation. The other major problem is vehicle run-overs; workers should remain clear of vehicle travel paths, and extra riders should not be allowed on tractors unless safe seating is available.

Electricity is used on plantations in shops and for processing crops and lighting buildings and grounds. Improper use of electric installations or equipment can expose workers to severe shocks, burns or electrocutions. The danger is more acute in damp places or when working with wet hands or clothing. Wherever water is present, or for electrical outlets outdoors, ground fault interrupter circuits should be installed. Wherever thunderstorms are frequent or severe, lightning protection should be provided for all plantation buildings, and workers should be trained in ways to minimize their danger of being struck and to locate safe refuges.

Electricity as well as open flames or smouldering cigarettes can provide the ignition source for fuel or organic dust explosions. Fuels—kerosene, gasoline or diesel fuel—can cause fires or explosions if mishandled or improperly stored. Greasy and combustible waste poses a risk of fire in shops. Fuels should be kept clear of any ignition source. Flameproof electrical devices and appliances should be used wherever flammables or explosives are present. Fuses or electrical breaker devices should also be used in electrical circuits.

The use of toxic agrochemicals is a major concern, particularly during the intensive use of pesticides, including herbicides, fungicides and insecticides. Exposures can take place during agricultural production, packaging, storage, transport, retailing, application (often by hand or aerial spraying), recycling or disposal. Risk of exposure to pesticides can be aggravated by illiteracy, poor or faulty labelling, leaking containers, poor or no protective gear, dangerous reformulations, ignorance of the hazard, disregard of rules and a lack of supervision or technical training. Workers applying pesticides should be trained in pesticide use and should wear appropriate clothing and respiratory protection, a particularly difficult behaviour to enforce in tropical areas where protective equipment can add to the heat stress of the wearer (figure 2 ). Alternatives to pesticide use should be a priority, or less toxic pesticides should be used. 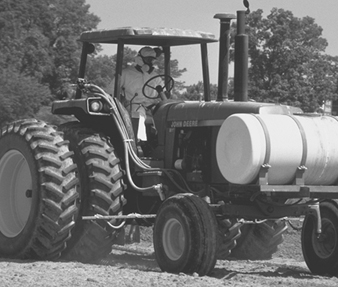 On some plantations, draught animals are used for dragging or carrying loads. These animals include horses, donkeys, mules and oxen. These types of animals have injured workers by kicking or biting. They also potentially expose workers to zoonotic diseases including anthrax, brucellosis, rabies, Q-fever or tularaemia. Animals should be well trained, and those that exhibit dangerous behaviour should not be used for work. Bridles, harnesses, saddles and so on should be used and maintained in good condition and be properly adjusted. Diseased animals should be identified and treated or disposed of.

Poisonous snakes may be present on the ground or some species may fall from trees onto workers. Snakebite kits should be provided to workers and emergency procedures should be in place for obtaining medical assistance and the appropriate anti-venom drugs should be available. Special hats made of hard materials that are capable of deflecting snakes should be provided and worn in locations where snakes drop on their victims from trees.

Infectious diseases can be transmitted to plantation workers by rats that infest buildings, or by drinking water or food. Unsanitary water leads to dysentery, a common problem among plantation workers. Sanitary and washing facilities should be installed and maintained in accordance with national legislation, and safe drinking water consistent with national requirements should be provided to workers and their families.

Confined spaces, such as silos, can pose problems of toxic gases or oxygen deficiency. Good ventilation of confined spaces should be assured prior to entry, or appropriate respiratory protective equipment should be worn.

Read 6665 times Last modified on Tuesday, 06 September 2011 23:23
Tweet
Published in Farming Systems
More in this category: Migrant and Seasonal Farmworkers »
back to top