Since the early 1990s, in many countries and across several continents, floriculture as an economic activity has been expanding rapidly. Its growing importance in export markets has resulted in an integrated development of several aspects of this field of activity, including production, technology, scientific research, transportation and conservation.

The production of cut flowers has two essential components:

The production process itself can be divided into three basic parts: germination, cultivation and post-harvest procedures.

Germination is carried out by planting parent plants from which cuttings are obtained for cultivation.

The cuttings of different flowers are planted on beds of a rooting medium. The beds are made from steam-treated dross and treated with chemical products to disinfect the growing medium and to facilitate root development.

Cultivation is done in greenhouses which house the beds of rooting medium where the flowers are planted and grown as discussed in the article “Greenhouse and nursery operations” in this chapter and as shown in figure 1. Cultivation includes preparing the soil, planting the cuttings (figure 2) and harvesting the flowers.

Figure 1. Tending flowers in a greenhouse 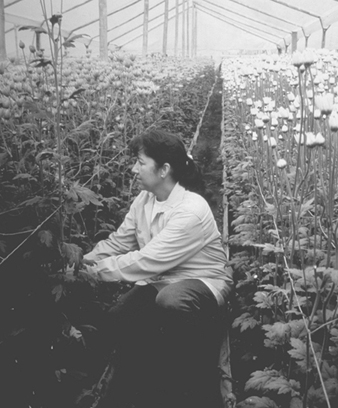 Figure 2. Planting cuttings in a greenhouse 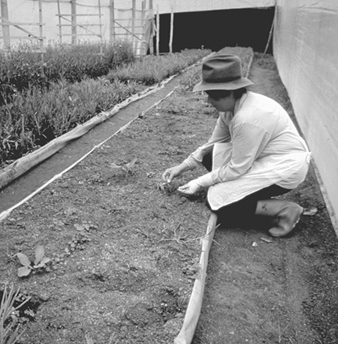 Planting includes the cycle that begins with placing the cuttings in the rooting medium and ends with the flowering plant. It includes the following activities: planting, normal irrigation, drip irrigation with fertilizer, cultivation and weeding of the soil, pinching the tip of the plants to force branching and obtain more flowers, preparing the props that hold the plants upright, and the growth, branching and flowering of the plant.

Production concludes with the gathering of the flowers and their separation by classification.

At the post-harvest stage—in addition to selection and classification—the flowers are covered with plastic hoods, a sanitary treatment is applied, and they are packed for shipment.

Secondary activities include monitoring the health of the plants to detect pests and to diagnose plant illnesses early, obtaining raw materials from the warehouse, and maintaining the furnaces.

The most important risk factors in each of the different areas of work are:

Intoxication and chronic illness due to pesticides

The levels of morbidity/mortality found in workers due to exposure to pesticides are not the consequence of a simple relation between the chemical agent and the person who has suffered exposure to it, but also reflect the interplay of many other factors. Among these are the length of exposure, individual susceptibility, the nutritional state of the person exposed, educational and cultural variables and the socioeconomic conditions under which the workers live.

The toxicity of pesticides made with organophosphates is due to their effect on the central nervous system, because they inhibit the activity of the enzyme acetylcholinesterase. The effects are cumulative, and delayed effects have also been noted on the central and the peripheral nervous systems. According to studies carried out in several countries, the prevalence of inhibition of this enzyme among workers who handle these pesticides fluctuates between 3 and 18%.

Decorative plants can irritate the respiratory system and cause coughing and sneezing. In addition, plant scents or odours may exacerbate symptoms of asthma or allergic rhinitis, although they have not been shown to cause allergies. Pollen from the chrysanthemum and the sunflower can cause asthma. Dust from dried plants sometimes causes allergies.

The cases of occupational dermatitis found in floriculture are about 90% primarily due to contact dermatitis. Of these, about 60% are caused by primary irritants and 40% are due to allergic reactions. The acute form is characterized by reddening (erythema), swelling (oedema), pimples (papules), vesicles or blisters. It is especially localized on the hands, wrists and forearms. The chronic form can have deep fissures, lichenification (thickening and hardening) of the skin, and severe xerosis (dryness). It can be incapacitating and even irreversible.

Floriculture is one of those activities where contact with primary irritants or allergenic substances is high, and for that reason it is important to promote and use preventive measures, such as gloves.

When work must be carried out in a hot environment, as in the case of hothouses, the thermal load on the worker is the sum of the heat of the work environment plus the energy expended on the task itself.

Physical effects of excessive exposure to heat include heat rash, cramps and muscle spasms, exhaustion and fainting spells. Heat rash, in addition to being uncomfortable, lowers the worker’s tolerance to heat. If perspiration is abundant and liquids and electrolytes are not replenished adequately, cramps and muscle spasms can set in. Heat exhaustion occurs when vasomotor control and cardiac output are insufficient to compensate for the additional demands placed on these systems by the heat stress. Fainting spells represent a very serious clinical situation that can lead to confusion, delirium and coma.

The most important kinds of non-ionizing radiation that floriculture workers are exposed to are ultraviolet (UV) radiation, visible light and infrared radiation. The most serious effects of UV radiation are solar erythema, actinic dermatitis, irritative conjunctivitis and photokeratitis.

Radiation from the visible spectrum of light may cause retinal and macular degeneration. One symptom of exposure to infrared radiation is superficial burn of the cornea, and prolonged exposure can lead to the premature appearance of cataracts.

Workers who maintain a static body posture for long periods of time (see figure 3) can suffer from resulting static muscle contractions and from alterations of the peripheral, vascular and nervous systems. Repetitive movements are more common in tasks that require manual dexterity. For example, clipping shears can require a lot of force and involve repetitive motion. The most frequently observed effects are musculoskeletal impairments, including tendinitis of the elbow and wrist, carpal tunnel syndrome and impairment of movement at the shoulder.

Figure 3. Bending over for extended periods is a common cause of ergonomic problems 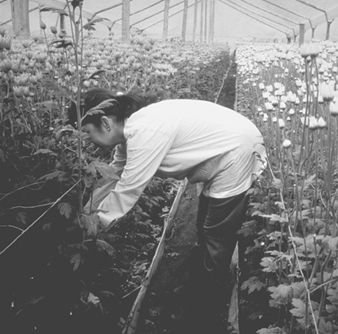 Job rotation and the proper ergonomic design of equipment such as clipping shears are needed precautions. Redesigning the workplace to require less bending is another solution.

Floriculture may expose workers to a variety of biological agents. Early signs of an infection are rarely specific, although they are generally well-defined enough to lead to a suspicion of illness. The signs, symptomatology and precautions depend on the agent, which includes tetanus, rabies, hepatitis and so on. Preventive measures include a source of potable water, good sanitary facilities, first aid and medical care for cuts and abrasions.

The most common health and safety hazards associated with mechanical factors are cuts, abrasions and single and multiple traumas, which most frequently injure the hands and face. Such injuries must be attended to immediately. Workers should have up-to-date tetanus shots and adequate first-aid facilities must be available.

Read 5154 times Last modified on Wednesday, 24 August 2011 01:08
Tweet
Published in Farming Systems
More in this category: « Greenhouse and Nursery Operations Farmworker Education About Pesticides: A Case Study »
back to top