Since the 1940s, the nature of vegetable farming, particularly in North America and Europe, has changed dramatically. Previously, most fresh vegetables were grown close to population centres by garden or truck farmers and were available only during or shortly after harvest. The growth of supermarkets and the development of large food-processing companies created a demand for steady, year-round supplies of vegetables. At the same time, large-scale vegetable production on commercial farms became possible in areas far from major population centres because of rapidly expanding irrigation systems, improved insect sprays and weed control, and the development of sophisticated machinery for planting, spraying, harvesting and grading. Today, the main source of fresh vegetables in the United States is long-season areas, such as the states of California, Florida, Texas and Arizona, and Mexico. Southern Europe and North Africa are major vegetable sources for northern Europe. Many vegetables are also grown in greenhouses. Farmers’ markets selling local produce, however, remain the major outlet for vegetable growers throughout much of the world, particularly in Asia, Africa and South America.

Vegetable and melon workers are exposed to many occupational hazards in their working environment, which include plants and their products, agrochemicals for controlling pests and oils and detergents for maintaining and repairing machinery. Manual or automatic work also forces the workers into uncomfortable positions (see figure 1). Musculoskeletal disorders such as low-back pain are important health problems in these workers. Agricultural tools and machines used with vegetables and melons give rise to high risks for traumatic injuries and various health impairments similar to those seen in other agricultural work. In addition, outdoor growers are exposed to solar radiation and heat, whereas exposure to pollens, endotoxins and fungi should be taken into account among greenhouse farmers. Therefore, a wide variety of work-related disorders can be found in those populations.

Figure 1. Manual labour on a vegetable farm near Assam, Jordan 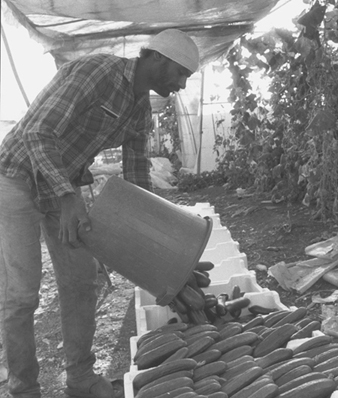 Clinically, the most common occupational allergic diseases reported in the vegetable workers are allergic dermatitis, asthma and rhinitis. Extrinsic allergic alveolitis, allergic photodermatitis and allergic urticaria (hives) can be seen in some cases. It should be emphasized that vegetables, melons, fruits and pollens have some allergens in common or cross-reacting allergens. This implies that atopic persons and individuals with an allergy to one of those may become more susceptible than others in the development of occupational allergies. To screen and diagnose these occupational allergies, a number of immune tests are currently available. In general, the prick test, intradermal test, measurement of allergen-specific IgE antibody and in vivo allergen challenge test are used for immediate allergies, whereas the patch test can be chosen for delayed-type allergy. The allergen-specific lymphocyte proliferation test and cytokine production are helpful in diagnosing both types of allergy. These tests can be performed using native vegetables, their extracts and released chemicals.

Dermatoses such as pachylosis, hyperkeratosis, nail injury chromatosis and dermatitis are observed in vegetable workers. In particular, contact dermatitis, both irritant and allergic, occurs more frequently. Irritant dermatitis is caused by chemical and/or physical factors. Vegetable parts such as thrichomes, spicules, coarse hairs, raphides and spines are responsible for most of this irritation. On the other hand, allergic dermatitis is classified into immediate and delayed types on the basis of their immunopathogenesis. The former is mediated through humoural immune responses, whereas the later is mediated through cellular immune responses.

Clinically, many patients with allergic dermatitis experience a range of symptoms including itching, erythema, rash, swelling and vesicles. The sites of lesions are mainly the hands, arms, face and neck. In a field survey of Japanese okra growers (Nomura 1993), more than 50% of farmers had skin lesions, and these appeared mostly on the hands and arms. About 20 to 30% of farmers showed a positive patch test reaction to okra pad or leaf extracts. Furthermore, proteolytic activity of okra extracts was shown to cause the skin lesions.

Agricultural chemicals are also important allergens responsible for allergic dermatitis. These include insecticides (DDVP, diazinon, EPN, malathion, naled, parathion and so on), fungicides (benomyl, captafol, captan, maneb, manzeb, nitrofen, plondrel®, thiram, zineb, ziram and so on), herbicides (carbyne, randox and so on) and fumigants (D-D® mixture of 1,3-dichloropropene and 1,1,2-dichloropropane and related compounds). Additionally, opportunistic bacteria and Streptococcus pyogenes are found to play an important role in allergic dermatitis and urticaria for vegetable workers.

Vegetable workers, especially those working in greenhouses or indoors, are exposed to many vegetable products and to compounds such as pesticides, which are responsible for increased lung diseases. In a national study conducted among Swiss farmers, it was documented that the age-standardized proportional mortality for all lung diseases, bronchitis and asthma, and asthma alone were 127, 140 and 137, respectively. Vegetable products can directly cause occupational allergic asthma, or provide non-specific irritants and/or the vehicle for other allergens including pollens, spores, mites and other substances. Vegetable products which can cause allergic asthma are bromelin, castor beans and wax, freesia, grain pollen, guar gum, papain, paprika, hops, ipecacuanha, plicatic acid, quillaic acid, saponin and sunflower pollen.

Fungi in the work environment produce many spores, some of which cause allergic asthma and/or extrinsic allergic alveolitis. However, it is rare that allergic asthma and extrinsic allergic alveolitis from those allergens occur in the same subjects. As for the causative micro-organisms, Alternaria, Aspergillus niger, Cladosporium, humidifier sludge, Merulius lacrymans, Micropolyspora faei, Paecilomyces and Verticillium have been identified. In most cases, antigens of fungal origin are present in spores and breakdown products.

Agrochemicals are applied for various purposes both in indoor and outdoor vegetable growing. Among the chemicals used, some have been found to have asthmatic potential. They include captafol, chlorothalonil, creosote, formaldehyde, pyrethrin and streptomycin. The improper uses of pesticides potentially can result in soil and vegetable contamination. The application of pesticides without suitable personal protective equipment can lead to both acute or chronic toxic effects.

Read 3388 times Last modified on Wednesday, 24 August 2011 02:34
Tweet
Published in Food and Fibre Crops
More in this category: « Potato Harvesting
back to top